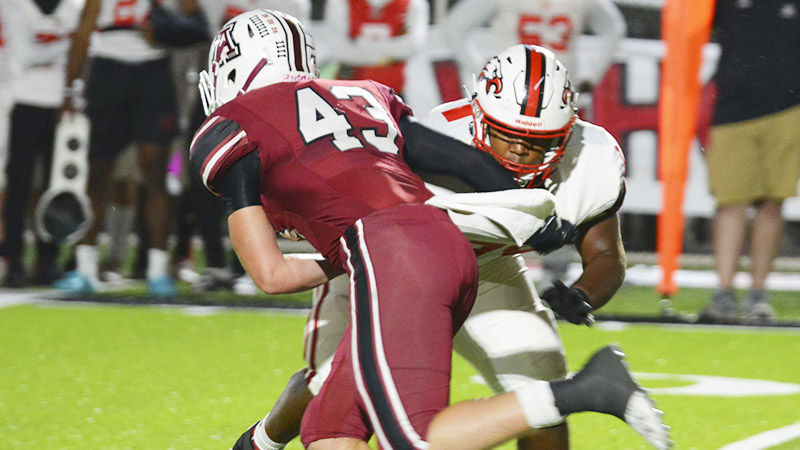 Andalusia got a much-needed jolt from its offense and doubled up, Carroll, 48-24 to snap a two-game slide and end the regular season Friday night.

The victory was the 250th of head coach Trent Taylor’s career. “I’m very, very proud. We had some guys that really stepped up tonight, and I’m really proud of them,” he said.

Carroll began the game on offense and quickly ran into a strong defense. After a punt, Andalusia only needed four plays to strike first. Ayden Amis threw a 22-yard first down strike to Kaden Denson at the visiting 27. J’Marion Burnette then picked up 17 yards on three carries before Omare Latimer scored on a 10-yard touchdown run. Cole Morgan added the PAT for a 7-0 lead with 8:55 left in the first quarter.

The Eagles took over at their own 19 and put together a long 17-play drive. Keyshawn Cole had four first downs to help the opposition reach the 4. The Bulldogs held their ground on defense and forced a 21-yard field goal. Brayden Gilbert was good to cut the deficit to 7-3. Burnette began the next drive with a powerful 22-yard run, and Amis moved the chains with a 12-yard pass to Zavier Hamilton to end the opening quarter.

Burnette extended the AHS lead to 14-3 on a 30-yard blitz to open the second quarter. CHS took over deep at the 14 and answered the call right back. Lakeith Person came up with a pair of runs for first down. Cole converted a key third down with a 14-yard pass to Takoda McLeod and kept the drive alive. Following three straight runs from Person, Carroll faced a fourth and 3 from the home 11. Cole not only moved the chains but found the end zone to make the score 14-10 with 7:00 left in the half.

The Bulldogs (6-4, 4-2 5A Region 2) once again had a response as Burnette went to the ground for 35 yards. The Eagles (4-5, 3-3) were poised to make a stop on fourth down, but it was not to be. Amis connected with Hamilton for a 14-yard touchdown pass and a 21-10 lead. Carroll followed with a huge kickoff return and looked to tighten the score just before the half. Andalusia had other plans as Latimer intercepted a pass in the red zone and ran it to the house 97 yards. That made the score 28-10 at the break.

Joseph Turner began the second half with a 68-yard return and got AHS going once again. Burnette wasted no time and scored from 25 yards out on the first play to stretch the lead to 35-10 early in the third. Person opened the next series with a 28-yard run before CHS turned the ball over on downs. Andalusia stalled on its next drive, and Carroll found the end zone again. Cole found Peyton Plott on a 4-yard touchdown pass, and the score moved to 35-17 with 4:03 left in the third. It was all Burnette on the ensuing drive with 45 yards rushing and a 3-yard scamper into the end zone. The two-point conversion failed, but the score was 41-17 after three quarters.

After the Bulldogs forced another fourth down stop, Latimer engineered a 33-yard stretch on four carries. Latimer scored from five yards to bury to push the margin to 48-17. The Eagles came up with an interception on defense and took advantage to trim the deficit to 48-24. Person had a 9-yard run with 5:01 left in the game. AHS went three and out on its final drive as CHS reached the home 4 before time ran out.

With the win, Andalusia is assured of the number three seed and will travel to the second seed of Region 4 for the first round of the playoffs in two weeks. “The biggest thing is now we get a week to rest some guys and try to get better,” Taylor said.

Author’s Note: Maggie Furr contributed the photo for this story.