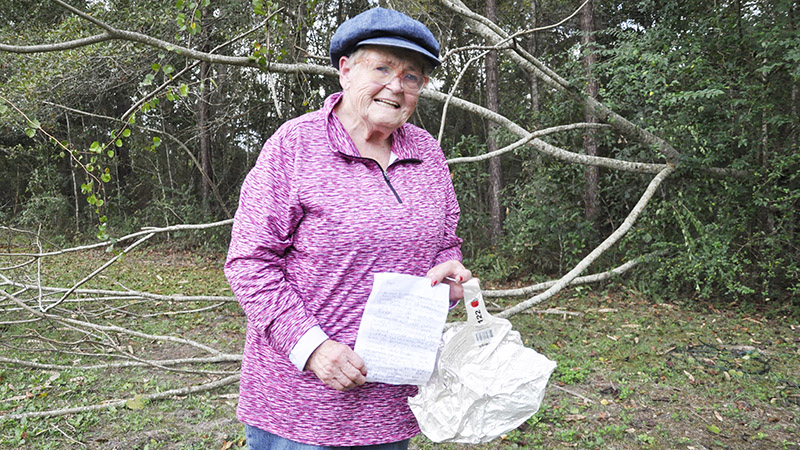 Carolina resident Lois Castleberry was the unexpected recipient of a special and heartfelt message that fell from the sky and onto her property, although the message was certainly intended for someone else.

Castleberry, who will turn 84 in November, said she and her grandson were on the porch talking one night.

“We were sitting out here rocking and just happened to look out and see the two balloons in one of my trees.”

They became curious about the balloons and wanted to know why they could be there.

“My grandson said, ‘Look Granny’ and went to get a pitchfork. He attempted to try and get it down but couldn’t reach it with the fork and even climbed the tree a little bit. We left it alone until another day when he and a friend returned to my house,” Castleberry said.

A few days later, Castleberry’s grandson and a friend of his found a saw. Before they started sawing, they shook the limbs and noticed there was a note with one of the balloons. She said the two managed to saw the limbs, and the balloons fell down.

“Once they got the balloon with the note attached, we brought it back to the house and tried to make it out.”

The note turned out to be a handwritten letter written in Spanish but did not have a name or any personal information attached to it. “We took it to a gentleman at the store who works up the road and knows some Spanish. He was able to make out a few words but not the whole thing. That’s when I decided to bring it to you all at the newspaper,” Castleberry said.

The Andalusia Star-News asked around for help in translating the letter and found Debbie Lizama, who is fluent in Spanish. Lizama was able to look over the letter and translate it into English.

According to the translation, the letter read:

“Dad, it has been six years. I feel like last week Laura gave me the news that God took you. It was time for you to go with Grandpa. I still don’t know why. We still needed a lot of things to do together. Our plans to have (something together). I miss your jokes in the mornings and even just to tell you hi. Never forget when you would say I love you because I love you I love you I love you and because of all the times you wouldn’t be here to tell me. I miss you telling me you love me. I don’t know how I’ve gone this far without you. I never imagined my life without you, without being able to love my dad. I know that God has a reason in this life. I’ll never understand but I can’t understand. I love you. Rest in peace chaguito, my first love.”

Castleberry became emotional when she was read the translated letter as it reminded her of losing someone she loved, too. She lost her husband, J.T. Castleberry, several years ago.

“Even though it wasn’t directed to me, it brings back memories of my husband. He was a wonderful person and was a pastor at the First Congregational Church for 28 years. We were married for 33 years and built our house together back in the early 1990s,” she said.

She worked at the Southeastern Box Factory for 43 years and retired in 1997. Castleberry said her husband worked with her until he became disabled.

“He retired before I did and was eight years older than I was. We just had a really good life together, and I miss him,” Castleberry said.

The letter from the balloon was not signed and Castleberry may never know where it came from. A Mylar balloon, which appears to be the type found on Castleberry’s property, can travel further than a common latex balloon as it takes longer for the helium to escape the balloon’s skin. The distance it traveled would depend on an assortment of factors, including wind and how much helium was used to fill the balloon.