Florala will battle Eagles in final game of season 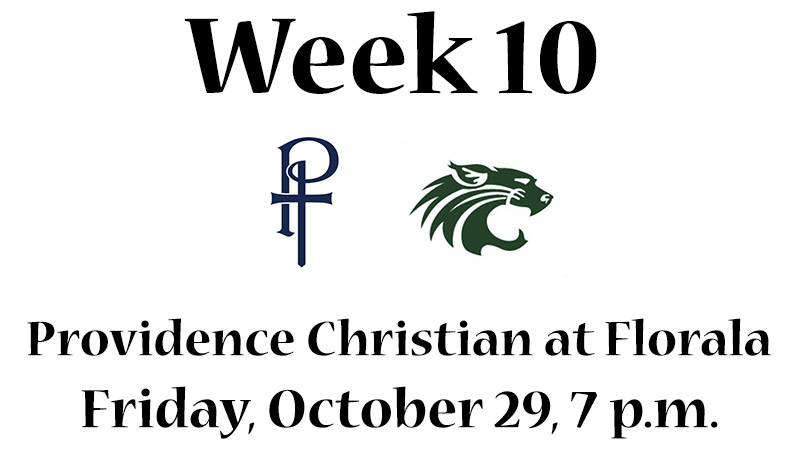 FHS stayed within striking distance of Brantley in the first half last week but ultimately fell, 54-24. PCS dispatched Daleville on the road, 41-6.

Head Coach Chris Littleton said Florala played hard and was in the game last week but made too many mistakes to have a chance to win.

“It was 27-16 at half, and I don’t think anyone in the state thought it would be that close. We turned the ball over twice and have to continue to work on those things. We made some big plays and some sustained drives in offense and created a lot of negative plays and turnovers on defense. Congratulations to Brantley on winning the region.”

Littleton knows what to expect facing another team two classifications up.

“Providence Christian is another 3A private school and another extremely well-coached, disciplined team. It will take a great game on our part, but I think our guys are ready to break through and end the season with a victory,” he said.

The majority of this year’s senior class has been riddled with injuries but has still made an impact during their time at FHS.

“Our seniors have really been a great group of leaders. We have lost several to injury and really only had one senior starter last week and two this week,” Littleton said. “They are all still an important part of our program and have helped pave the foundation for what is going to be a bright future at Florala.”

The two teams first met as region opponents in 2006. This year’s matchup marks the fifth time they will have squared off on the field. Although the Wildcats hold a 3-2 lead in the series, the Eagles have a scoring edge of 156-66 with two consecutive shutouts.

Florala was scheduled to travel to Dothan last season before Providence Christian forfeited the game due to the pandemic.