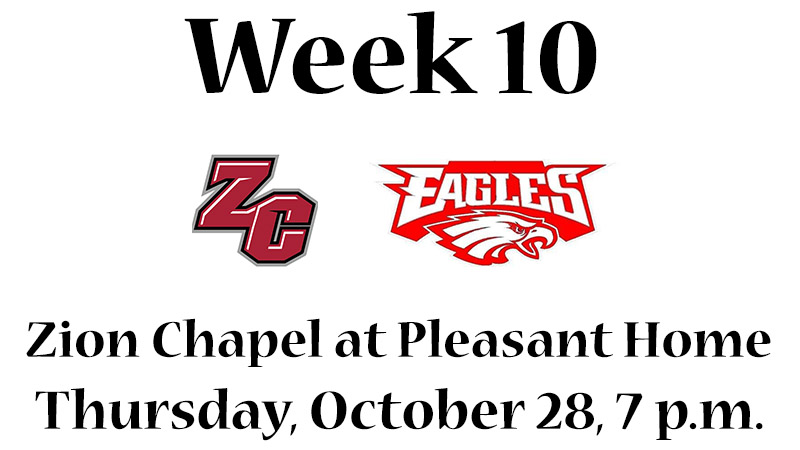 PHS led by three at halftime last week but fell short at Red Level, 33-22. ZCHS dropped its final home game of the year to Geneva County, 55-28.

“We had several miscues and penalties that killed several drives. Our guys really enjoy playing together.”

According to Silcox, Zion Chapel’s record is no indication of how good of a team they have. “They play in a very tough region. Coach (Randy) Bryant and his staff do an excellent job,” he said. “On offense, they move the ball in many different ways. On defense, they are hard to catch out of position.”

The game will be the last contest for Pleasant Home’s 11 seniors. “Our seniors have built a foundation and have bought into what we are doing. I can’t put into words what they mean to our staff and this team,” Silcox said.

Silcox added that he was proud of how the Eagles have matured this year and was also very happy with his coaching staff. “We have a great bunch of guys that put their hearts into these young men week in and week out,” he said.

This contest will be the 16th all-time meeting between PHS and ZCHS. Zion Chapel holds a 10-5 lead in the series and has a small scoring edge over Pleasant Home, 324-314.