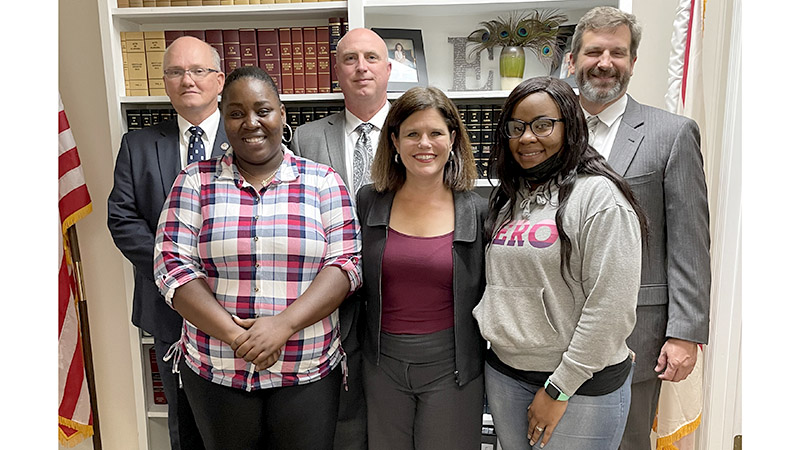 The investigation into Foster’s murder was conducted by the Alabama Law Enforcement Agency, Covington County Sheriff’s Office, and the River Falls Police Department.

The evidence at trial revealed that on the night of April 5, 2019, a neighbor found Foster, who was affectionately known as “Mr. Ed,” lying in the road in front of his home, bleeding.  He had been shot three times, one of them in the head.  The neighbor called 91l and Covington County Sheriff’s Deputies and River Falls Police officers responded.  They testified that Foster was curled up in a fetal position, with a pool of blood beneath him, and his skin was a “purplish white color.”  Before he was transported to Andalusia Health by ambulance, Foster told Officer Kyle Adams, “Shaye shot me.”  Adams knew both Foster and Bolling and knew they had been in a relationship.  The initial responding officers determined that Foster had been shot inside his home and had made his way outside before collapsing on the road.  They did not immediately locate Bolling or the gun she used to shoot Foster.

Sheriff Blake Turman spoke with Foster at the hospital.  He testified at trial that Foster was “blind, obviously in a lot of pain, and scared.  He told me, ‘Shaye got my rifle from under my bed. I tried to take it from her and it went off and shot me in the shoulder.  I fell down, and she aimed and shot me in the head.’”

The evidence at trial showed that Foster had been shot in the kitchen of his home, near the sink. Three spent .22 caliber rifle shell casings were found on the floor of the living room which adjoined the kitchen.  From a trail of blood, investigators determined that Foster had moved from the kitchen through the living room, outside to the porch, and to the road in front of his home. It was evident that he had to stop and rest several times during the journey. A .380 caliber handgun was found in a nightstand drawer in Foster’s bedroom. There was no blood in the bedroom or on the handgun.

After an extensive search of the area, in the early morning hours of April 6, 2019, Alabama Bureau of Investigations Director Chris Inabinett found Bolling hiding in an abandoned trailer near Foster’s home. Inabinett told Bolling, “The only thing I want to ask right now is where’d you put the gun.”  She lied initially, saying she had thrown it down inside Foster’s home but later admitted she had hidden the rifle underneath another abandoned trailer.

Bolling was interviewed by Inabinett and ALEA Agent Johnny Senn and admitted shooting Foster but attempted to justify her attack on him. She told Senn and Inabinett that she had accused Foster of “cheating on her” repeatedly throughout the day, to the point that he told her to leave his home.  She said that he picked up his cell phone — she thought to call the police — and she “snatched it from him.” She claimed that he then retrieved the .22 caliber rifle from his bedroom and she cut him with a knife when he returned to the living room.  Bolling said she grabbed the rifle when Foster dropped it and pointed it at him. She claimed that he then went to the dining room to get his .380 caliber handgun and that “he came back and went to shoot.” She tried to convince the agents that the rifle “just went off and kept shooting” and that she “ran out the door.” She later admitted that she saw Mr. Foster “drop to the ground” when she shot.  She also told Senn and Inabinett that she heard the ambulance leave with Foster and heard the law enforcement officers looking for her but remained hidden in the abandoned trailer.

Although Bolling tried to claim she shot Foster in self-defense, officials with the district attorney’s office said the evidence contradicted the stories she told Senn and Inabinett. The .380 handgun she claimed Foster had threatened her with was found in a drawer in his bedroom where there was no blood.  Officers did find Foster’s cell phone hidden under the living room couch, which explained why he had traveled outside to find help.  Bolling had hidden the phone and he was unable to call 911 after she shot him and fled.

The neighbor who found Foster after he had been shot testified that two days previously, Bolling had asked him whether he had seen any women at Foster’s home.  He replied in the negative, and she said, “He knows better.  He knows I’ll kill him.”

After he arrived at the hospital, doctors found Foster had been shot in the shoulder and wrist as well as in the head. He underwent multiple surgeries, including the removal of his right eye.  Foster died at the end of April.  Dr. Stephen Boudreau, who performed the autopsy, determined the cause of death was complications from gunshot wounds.

Two of Foster’s granddaughters attended the trial and were thankful for the justice the verdict brings their beloved “Granddaddy.”

Kimanisha Trawick said, “During the trial, I thought about the quote, ‘Never forget that justice is what love looks like in public.’ Thank you to everyone involved in the case, especially to Kyle Adams, to Johnny Senn and Chris Inabinett, and to Walt Merrell, Grace Jeter, and the whole DA’s Office. We thank you all.”

Her sister, Oleshia Anderson, added, “The dead cannot cry out for justice.  It is the duty of the living to do so for them.  My sister and I made a promise to get justice and to stick beside each other and we did it! I want to give a special thank you to Walt Merrell, Grace Jeter, DA’s Office Victim Service Officers Amber Gladwell and Amy Harper, and to all the detectives and officers who worked on our grandfather’s case.”

Likewise, Merrell complimented ALEA, the Covington County Sheriff’s Office, and the River Falls Police Department for their hard work.  “Those guys don’t get enough credit for the effort they put into cases like this.”

After the jury’s verdict, Judge Short remanded Bolling to the custody of the Covington County Jail, where she remains pending her sentencing hearing on Dec. 14, 2021.  She faces a sentencing range of 20 years up to life imprisonment.

“Mr. Ed was well-known and well-loved not only in River Falls but throughout the county,” Merrell said, “He was a hard-working, kind man and Shaye Bolling shot him in cold blood and left him to bleed to death.  At her sentencing hearing, we will ask Judge Short to sentence her to spend the rest of her life in prison.  Justice will best be served if she takes her last breath behind bars.”