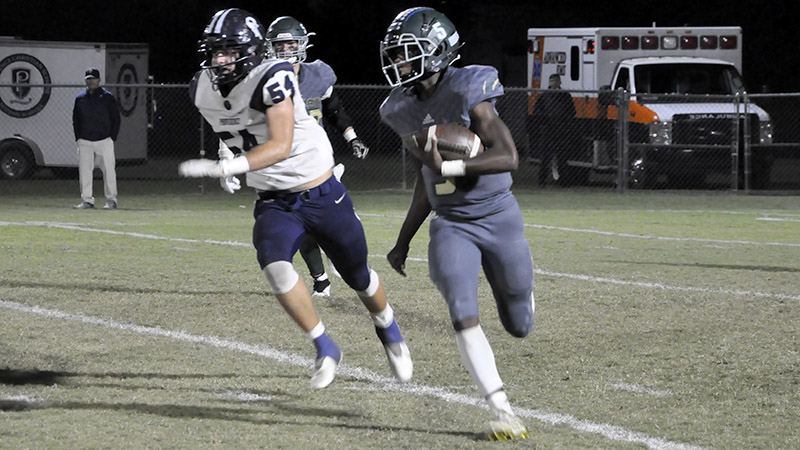 Providence Christian’s 14-point first quarter was the difference in a 33-20 win at Florala in the season’s final game Friday night.

Providence (4-6) started at the 33 and only needed two minutes to strike first. Grant Baker converted a third and short with a 5-yard run. Craig Pittman rumbled 53 yards to the house, and the PAT made it 7-0 with 10:05 remaining in the first quarter. Florala (3-7) fumbled the kickoff as the opposition took advantage.

Pittman found Baker for an 11-yard gain on fourth down. Harrison Mims crossed the goal line from 9 yards out as the Eagles went ahead 14-0. Connor Greer connected with Johan Zamora on a 16-yard strike to the opposing 47. The PCS defense made a stop before FHS forced a turnover on downs.

Florala took over and went 53 yards on 11 plays to find the end zone. Rayshon Coleman scampered 13 yards and moved the chains with a clutch 4-yard fourth down run. Two plays later, Greer threw a 14-yard dart to Zane Weeks as the score remained 14-0 after one. Providence’s bid to make a fourth down stand never came when Coleman forged past the goal line from a yard out. The PAT failed and kept the score 14-6 with 11:12 left until halftime.

PCS responded with a 12-play, 73-yard drive and opened up a 21-6 lead. Pittman hit Gabriel Pemberton on a 26-yard gain. Mims kept the drive alive with a 7-yard run and scored a 15-yard touchdown. Weeks found Colby Strickland on a 13-yard trick play for a first down as FHS drove inside the 10. A 99-yard interception appeared to widen the lead. A block in the back negated the play as the halftime score was 21-6.

The Wildcats saw their opening drive of the second half stall and had to punt. Baker sprinted 60 yards to pay dirt and gave the Eagles a 27-6 lead. Florala answered right back when Austin Howell hauled in a 69-yard pass from Coleman. Strickland’s conversion cut the deficit to 27-14. Providence punted but recovered a fumble and retained possession at the end of the third.

Mims widened the margin to 33-14 with a 3-yard touchdown run to begin the fourth. After Coleman hit Weeks for 42 yards on two passes, Strickland pulled FHS within 33-20 on a 25-yard reception. The conversion failed and kept the score 33-20. PCS then put in its reserves and elected not to score.