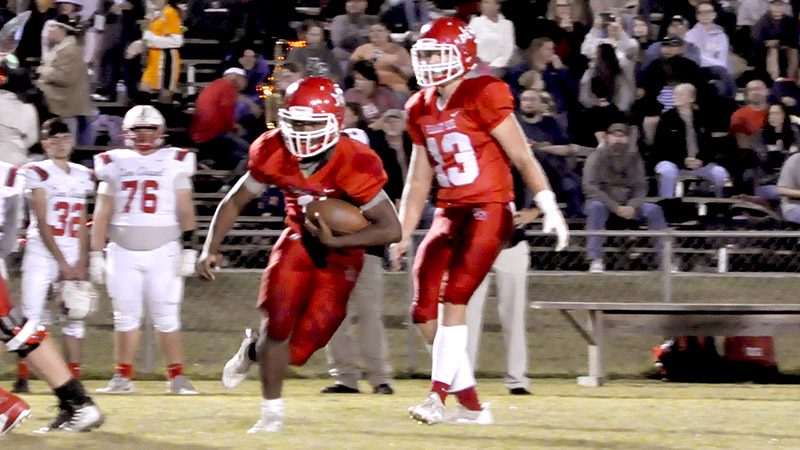 Two teams gave it their all in their final game of 2021 as Zion Chapel pulled away late for a 39-24 win at Pleasant Home Thursday night.

The Rebels began their opening possession at their own 44. Mason Stuart picked up a first down with an 11-yard run. Brayden Watson darted 21 yards, and Bradon Grantham pushed the ball inside the red zone with a 12-yard scamper. The Eagles forced fourth and goal before Grantham had a 14-yard touchdown run. The two-point conversion was good for an 8-0 lead with 7:40 left in the first quarter.

Pleasant Home (1-9) responded with a strong drive and drew even. Mason Anderson moved the chains with a fourth down conversion. Ladarius Purifoy followed with another first down on a 10-yard run. Ethan Curry capped the 13-play, 60-yard drive with a 16-yard touchdown pass to Colt Hinson. Nick Short was true on the conversion and tied the score at 8-8. Zion Chapel (1-9) had a 15-yard run from Stuart on the final play of the quarter.

Grantham began the second quarter with a pair of carries for 30 yards. Zakyran Adair scored on a 4-yard run, but the try failed to leave the score 14-8. Curry threw a 15-yard strike to Short for the hosts as Hinson blitzed 12 yards. The visitors thwarted the drive and then extended the lead with 2:41 remaining in the half. Watson began the series with a 24-yard run and also hauled in a 22-yard reception. Stuart connected with Brayden Benbow on a 35-yard pass and found the end zone on a 6-yard run. The score remained 20-8 after the conversion was no good.

The Eagles took advantage of a short field and only needed four plays to draw closer. Anderson threw a 39-yard pass to Curry for a first down and scored on a 6-yard run. Short added the conversion to make the halftime score 20-16. The Rebels began the second half with an onside kick and forced a three and out. The offense stretched the lead to 26-16 at the 6:40 point of the third. Stuart hit Adair for a 39-yard gain and ended the six-play drive with a 27-yard touchdown run.

After PHS threw an interception on its next drive, ZCHS took its time running the ball until Hinson recovered a fumble. Following a bad snap, Anderson had a 33-yard pass to Logan Bolling. Purifoy found the end zone two plays later, and Landon Kelley added the two-point conversion and made the score 26-24. Stuart answered the call right back with a 7-yard touchdown run, and the Eagles trailed 32-24 with 10:06 left. Anderson earned a 19-yard run before the Rebels forced a key turnover on downs.

Zion Chapel built some breathing room with a 12-play, 69-yard drive. Adair ended the nearly five-minute drive with a 12-yard run. The PAT was good and widened the margin to 39-24. Pleasant Home had an 11-yard pass from Anderson to Bolling before the game ended.