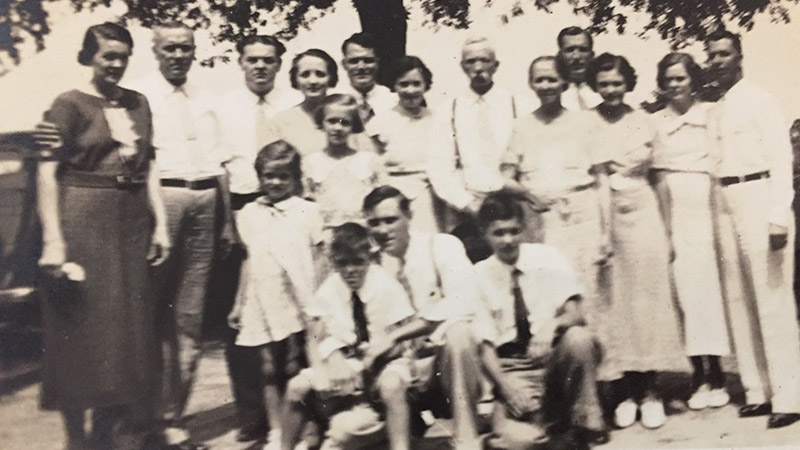 The Courson family of Covington County, Ala. is believed to have descended from a Veteran of the Revolutionary War. William James Courson was born in 1761 in South Carolina and served as a private with the South Carolina Troops. His parents appear to have been William Thomas Courson and Sarah Johnson, but that has not been documented at this time.

William James Courson was married to Lavice Matthews who was born in 1782. They migrated from South Carolina to Georgia where he is shown in the records of Warren, Washington, Hancock and Jones Counties. Around 1817, they moved west to Conecuh County, Ala. A couple of years later, the family moved back east to Pike County where they resided until 1832 at which time, they moved to Montgomery County. James died in 1834 in Macon County in an area that became a part of Bullock County in 1866.

Following James Wyatt Courson’s untimely death at the age of 38 years, his widow, Elva, struggled with their four children to keep the farm going. Eventually she married William Thomas Norton who had been hired to help on the farm to assist her. She and WT (as he was known) had one child together, Ruby Edna, b. 1903, d. 1986, m. James Marvin Butts (1889-1973). Ruby was a student at Troy Normal circa 1919 along with Lena Tollison and Lois Ham. She probably had a hand in matching these two ladies with two of her brothers to become their wives. Ruby became a teacher and resided in Montgomery. It was there she met and married Marvin and they lived in Montgomery until they retired and moved back to the farm in River Falls. They built a house on the site of the Courson/Norton farm and lived there for many years. They had no children and both were buried in the Butts plot in Magnolia Cemetery in Andalusia.

The third son of Thomas Wesley Courson, John Wilburn Courson, known as Wibb, was born in 1837 in Pike County and died there in 1917. In 1862, he enlisted as a private in Company K, 37th Alabama Infantry Regiment of the Confederate Army. He was captured and taken as prisoner in November 1864 at Lookout Mountain and held until the end of the war. After he returned home, he was married in 1867 to Sarah Ann McLeod (1844-1917), daughter of John Jackson “Silver” McLeod and Elizabeth Jane Easters. Sarah Ann was described as a “Splendid Woman.” In 1911, he owned 220 acres of land in the Goshen community of Pike County. He was regarded as one of the oldest and best-known settlers in the southeastern section of Pike County.

Thomas Wesley’s youngest son, Hilliary Henry Courson, was born in 1842 and was the right age for service in the Confederate Army. At 19 years of age, he enlisted at Spring Hill, Pike County, in March 1862 and was assigned a private to Company K, 37th Alabama Infantry Regiment. He died in 1865 at Bentonville, N.C.

This coverage of the Courson family will be continued in next week’s column with a closer look and the family of Luther Eugene Courson Sr.

Thank the hand that feeds us

Let’s not take our blessings for granted

Thankfulness comes from counting your blessings

It’s difficult to resist a strawberry