Bobcats will host pesky Reeltown in first round 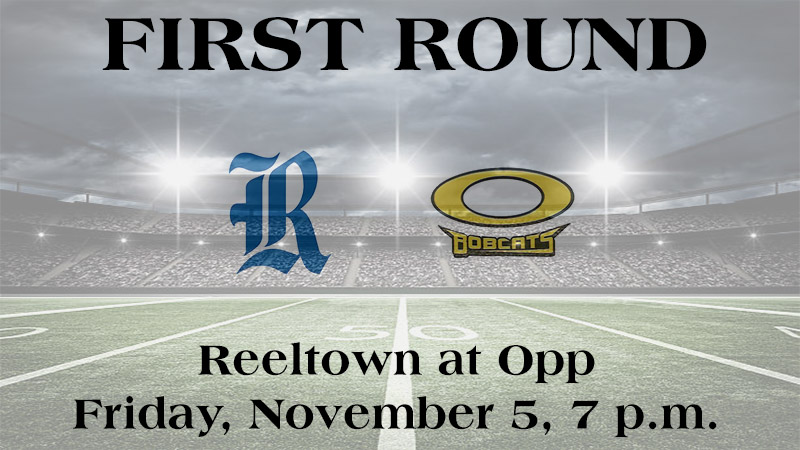 The Bobcats did not play last week and represent Region 2 as the second seed. The Rebels finished as the third seed in Region 4 and won at Holtville last week, 40-26.

Although the team did not achieve their main goal to win the region, one was still accomplished. “It’s always an advantage to start the playoffs at home. You don’t know where you go if you’re fortunate enough to win, but it was a goal of ours to play here at Channell-Lee Stadium on Randy Griffin Field,” Head Coach Mike Dubose said.

The bye week was beneficial for the Bobcats. “I gave them off Monday and thought we got a lot accomplished Tuesday and Wednesday. I think it gave us a pretty good idea going into the week of what we want to try and do,” Dubose added.

This will be the first-ever meeting of OHS and RHS.

“Reeltown is a very good football team and plays in a very strong region. They are well-coached and physical with speed at the right positions. They will line up in the wishbone sometimes and also get in the spread. They present a lot of different looks in all three phases of the game,” he said. “It will be a challenge for us, but this is expected once you get to playoff time.”

Opp enters its 26th playoff appearance with an 11-25 all-time mark and is 10-15 in the opening round. The Bobcats won a defensive struggle at home against Greensboro last season, 14-8.

Reeltown opens its 38th playoff appearance with an all-time record of 70-34 and 27-10 first round showing. The Rebels missed the playoffs in 2020 but downed Zion Chapel 56-0 in 2019 and finished as the 2A state runner-up.

The winner of this game advances to the second round against T.R. Miller or Hale County next week.

“We’re excited about playing and looking forward to it. We’re praying it will be a pretty day and a good day for the Bobcats. It should be a really good football game,” Dubose said.

Bulldogs head to Sylacauga for first round of playoffs