Bulldogs head to Sylacauga for first round of playoffs 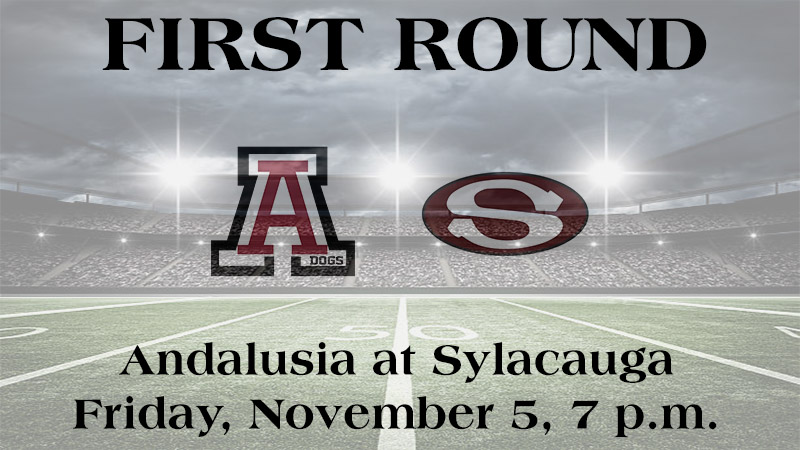 The Bulldogs took the third seed in Region 2 with a home win against Carroll two weeks ago, 48-24. The Aggies earned the second seed from Region 4 after a tiebreaker was settled but fell to Benjamin Russell last week, 35-28.

This year marks the seventh straight season for AHS into the playoffs. “Everybody is 0-0 right now, and we’re glad to be playing,” Head Coach Trent Taylor said.

Sylacauga finished in a three-way tie with Central-Clay County and Tallassee, and Taylor believes the Aggies will be a tough opponent.

“I know they have a running back who has rushed for over 2,000 yards and a quarterback that is also a really good player. In that whole region, I guess you could say there was no true number one. It just came down to tiebreakers, and they have a good football team,” he said.

Taylor added last week’s bye week was good for Andalusia. “I think we got some kids well that were banged up. We worked on some things we need to improve on and gave our younger guys a lot of reps. With the limited time you have in spring training, it’s always good to steal a week any place you can.”

This will be the first contest between AHS and SHS.

Andalusia makes its 27th playoff appearance with an all-time record of 34-24 and 14-12 in the opening round. The Bulldogs defended their home turf against Marbury last year in a 44-7 rout.

Sylacauga enters its 28th playoff appearance with an all-time record of 19-26 and 10-17 first round performance. The Aggies dropped their seventh consecutive first round game at Faith Academy in 2020, 49-13.

The winner of this game advances to the second round against Demopolis or B.C. Rain next week.

“Our fans have done a great job supporting us at home and on the road. This Friday will be no different, and I know Sylacauga will be fired up hosting a first round playoff game. It should be a lot of fun,” Taylor said.