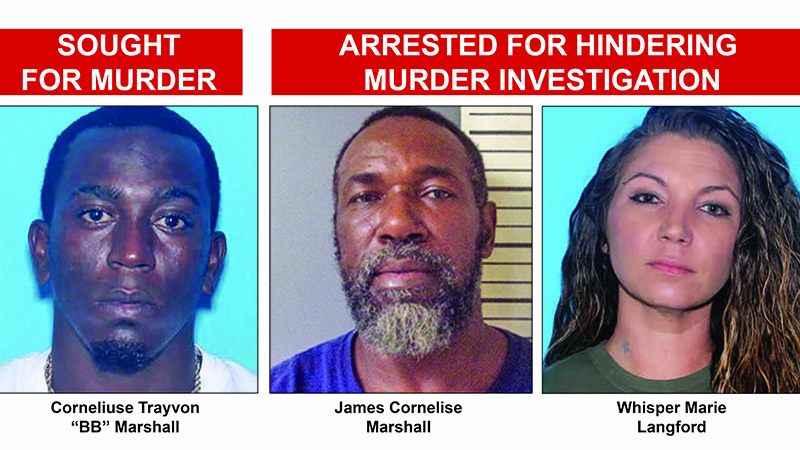 The Andalusia Police Department is seeking the public’s help in finding a local man wanted for an October 23 murder, and has also charged two people who are believed to have been assisting him in hiding from police and who have hindered the murder investigation.

Capt. Brett Holmes of the APD said investigators are looking for Corneliuse Trayvon “BB” Marshall, 27, of Andalusia, who is wanted for murder in the death of Domonique Terrell Curry, 32, also of Andalusia. “BB” Marshall is believed to most recently have been hiding in Opp and is likely still in the immediate area.

During the course of the murder investigation, the APD has charged “BB” Marshall’s father and a woman believed to be his girlfriend for hindering the investigation, Holmes said.

On Wednesday, they charged Whisper Marie Langford, 35, of Andalusia, with hindering prosecution in the first degree. Holmes said Langford helped Marshall to elude police. She has been released from the Covington County Jail on a $50,000 bond.

They also charged the suspect’s father, James Cornelise Marshall, 53, of Andalusia, with intimidating a witness after he made threats to a witness in the case. He is being held on a $50,000 bond.

“We want the public to know that if you harbor or assist ‘BB’ Marshall, you will be charged and prosecuted,” Holmes said.

APD officers found Curry unresponsive in the roadway of the 400 block of Mock Street on Saturday evening, Oct. 23, when they responded to reports of gunshots. Advanced EMS transported Curry to Andalusia Health, where it was determined he had suffered at least one gunshot wound. He later succumbed to the injuries.

“Without them, we would not be this far along,” Holmes said.

Holmes said the investigation continues and other murder charges could be forthcoming.

APD Chief Paul Hudson said, “This type of criminal behavior will not be tolerated in the City of Andalusia. Officers and investigators have worked tirelessly since the incident to interview and obtain critical information about the occurrence to bring us to the criminal charges brought today.

“While the public may not always see our officers and investigators working, know they are and understand that these types of cases do take time to fully investigate,” he said.

“We offer our sincere condolences to the family of the deceased and we will continue to work alongside the local district attorney to ensure prosecution of those involved,” Hudson said. “We appreciate all of the assistance from all the agencies and departments that offered support and assistance.”

Anyone with information about the whereabouts of “BB” Marshall, or about the shooting is asked to immediately contact the Andalusia Police Department at 334-222-1155, or CrimeStoppers using the 24-hour tip line at 215-STOP (7867).