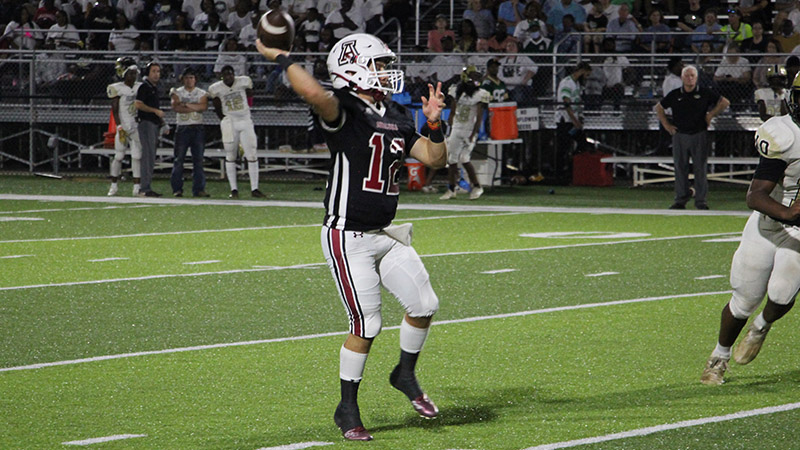 Ayden Amis threw for 212 yards in the air to help lead Andalusia past Sylacauga in the first round of the playoffs.

Andalusia racked up 521 yards of total offense and cruised to a first round 42-7 rout at Sylacauga Friday night.

Head Coach Trent Taylor was really proud of how well the Bulldogs played on both sides of the ball. “I think it was really big that Ayden connected with Kaden two or three times. I told the guys on TV we’re going to run the ball. Both J’Marion and Omare had big nights. Defensively, to have a team stay on the field for the entire quarter and not allow them to score was really tremendous. It was also nice to keep their running back who had over 2,000 yards rushing out of the end zone,” he said. “Our front dominated as well.”

The Aggies began the game on offense and kept the ball nearly the whole first quarter. The Bulldogs came up with a huge stop on fourth down inside the 5-yard line to keep the game scoreless. Ayden Amis threw a 67-yard pass to Kaden Denson on the final play of the first quarter. J’Marion Burnette got the call for the next three plays and scored the first touchdown of the night from a yard out. Cole Morgan’s PAT was good to give Andalusia a 7-0 lead less than a minute into the second. Sylacauga used another four minutes off the clock but once again came up empty-handed.

Andalusia doubled the lead to 14-0 just before halftime on a 45-yard touchdown pass from Amis to Denson. Sylacauga fell behind further 21-0 early in the third quarter. Omare Latimer had a 49-yard touchdown. Midway through the quarter, Amis stayed electric in the air with a 20-yard touchdown pass to Burnette. Morgan added the PAT to make the score 28-0 with 5:32 left in the third. The Aggies forced a fumble on defense and returned it for a score to get on the board, but the Bulldogs still led 28-7.

Burnette found the end zone from 19 yards out in the fourth to stretch the margin to 35-7. Zavier Hamilton closed out the scoring with a 25-yard touchdown run at the 4:32 mark of the final quarter. Amis finished the game 6-of-14 passing for 212 yards and two touchdowns. Burnette led the Bulldogs ground game with 124 yards on 21 carries. Denson earned 158 receiving yards on just three receptions.

Michael Hourel, Jr. had 7.5 tackles on defense for Andalusia and was followed by Joseph Turner with 6. Garrett Blackston picked up 5.5 tackles while Jordan Hart, Zade Newton, and Hamilton all had 4.5.

With its seventh straight first round win, Andalusia improves to 7-4 on the season. Sylacauga, who was playing its first home playoff game in 20 years, ends the year 7-4.

The Bulldogs will return home next week to face Demopolis in the second round. The Tigers will come into the game with an identical 7-4 record after routing B.C. Rain at home in the first round, 49-6.

“It doesn’t matter who we play because we’re at home,” Taylor said.

Opp advances to second round with win over Reeltown,…