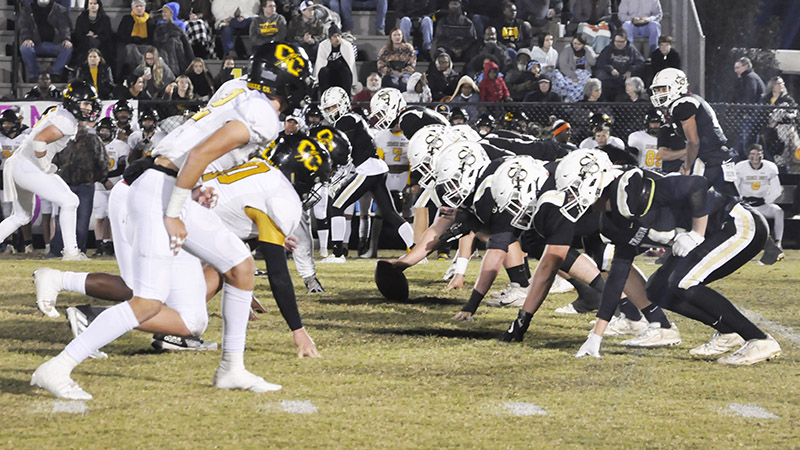 The Straughn offense looks to make a big play on offense against the Cherokee County defense.

In a hard-fought game on both ends, Cherokee County made some key plays and held on for a 34-26 first round win at Straughn Friday night.

The Tigers began the game on their own 18 and quickly scored. Abram Guilford threw a 69-yard strike to Micah Turner on the first play. Abram Guilford found Turner a second time on an 11-yard touchdown pass. Brenden Bartholomew added the PAT for a 7-0 lead a minute and 38 seconds in. The Warriors took over and moved downfield on three first down runs by Damien Ramsey. Lamycal Mitchell pushed the ball inside the red zone before a fumble ended the drive at the 9.

Cherokee County (7-3) regained possession right back after an interception from Dalton Chestnut and took advantage. Ramsey scored a 13-yard touchdown run, and the PAT was good tying the score at 7-7. Straughn (7-4) needed just five minutes to reclaim the lead. Jaylon Guilford had an 11-yard reception as Olhava picked up a 4-yard first down run before Turner caught a 34-yard pass. Abram Guilford added a 13-yard run, and a face mask penalty ended the first quarter. Olhava found the end zone from 3 yards out and capped the 10-play, 80-yard drive early in the second. Bartholomew’s PAT made it 14-7.

CCHS answered the call and broke even. Ramsey earned 11 yards on the ground, and SHS appeared to force a stop with a punt. A defensive holding was ruled to have taken place before the kick, and the drive remained alive. Cade Hopper found an open receiver from 32 yards out to force a 14-14 game with 8:51 left in the half. Straughn got a big first down run by Abram Guilford, but Turner boomed a punt as Cherokee County took over at the 3.

Mitchell gave the Warriors room to work with a 19-yard run but fumbled. The Tigers came up short on a fourth and 1 inside the 5. Mitchell, Hopper, and Ramsey pushed the ball into opposing territory with strong runs. Cherokee County took a 21-14 halftime lead after a 3-yard touchdown run by Ramsey. Straughn fell further behind right after the break as Hopper found a receiver on a 19-yard score. The PAT was good and widened the score to 28-14.

SHS then cut the deficit back to single digits. Abram Guilford found Jaylon Guilford open for 26 yards to start the drive. Aaron Olhava finished with a 4-yard touchdown run. The score remained 28-20 after a blocked PAT. CCHS only managed one first down on the next drive. Straughn went to the air for 23 yards but still trailed 28-20 after three quarters. Three plays into the fourth, Cherokee County saw its lead slip to two after a 9-yard run from Jaylon Guilford but stayed in front 28-26 after a failed conversion.

The Warriors went three and out to give the Tigers hope. Abram Guilford hit Turner on a 46-yard play, but Straughn ran into a roadblock when Cherokee County forced a turnover on downs. Hopper and Ramsey picked up four first downs. Ramsey extended the margin to 34-26 with a 9-yard run, but the PAT was wide leaving the hosts with a chance. Abram Guilford threw an 11-yard dart to Olhava near midfield, but CCHS made another stop and took a knee to end the game.