Mrs. Mary Wright Hill, of Andalusia, passed away Wednesday, Nov. 3, 2021, at Mount Royal Towers in Birmingham, where she had been a resident for several months. She was 92 years old at the time of her death.

Mrs. Hill was born on Sept. 15, 1929, in Excel, Alabama. She was the daughter of Herman Isaac Wright and Sarah Coleman Wright. She was a graduate of Excel High School in Excel. In 1950 she married John E. Hill of Boaz, Alabama. 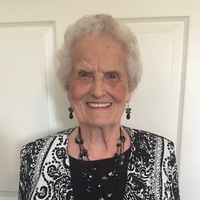 Mrs. Hill was a member of Andalusia First Baptist Church where she served in many capacities such as teaching Vacation Bible School, teaching Training Union, singing in the choir, and serving on various church committees. When she was in her fifties, she learned sign language so that she could participate in the deaf ministry of First Baptist Church, where she served as a sign language interpreter for many years.

Mrs. Hill worked at Covington County Bank in Andalusia for 20 years, where she loved meeting the public and enjoyed working with many friends. Prior to this, she was employed at Anderson Peanut Company part-time for several years. In addition, she was active in many civic organizations, such as Docena Club, Andalusia Women’s Golf Association, American Red Cross, American Cancer Society, Girl Scouts, and the Reader Advisory Board of the Andalusia Star-News. In 1997 she was selected to receive the Andalusia Kiwanis Club Citizen of the Year Award. As she served in the many different roles in her family, church, and community life, she communicated her love for the Lord and for others and desired to be a blessing to all she met.

Mrs. Hill was preceded in death by her husband, John Hill; parents, Herman and Sarah Wright; three brothers; and one sister.

Funeral services will be held Saturday,  Nov. 6, 11 a.m.,  at First Baptist Church of Andalusia. The family will receive friends at the church from 10 until 11 a.m. Rev. William Worley, Rev. John Foster, and Dr. Harrell Cushing will officiate. Special music will be provided by Rev. Don Lingle and Diane Johnson. Interment will follow at Andalusia Memorial Cemetery. Pallbearers will be Ziba Anderson, Duane Mooney, and her four grandsons, Ryan Mitchell, Matthey Mitchell, Jonathan Crain, and Andrew Crain.