Andalusia preps for second round against Demopolis 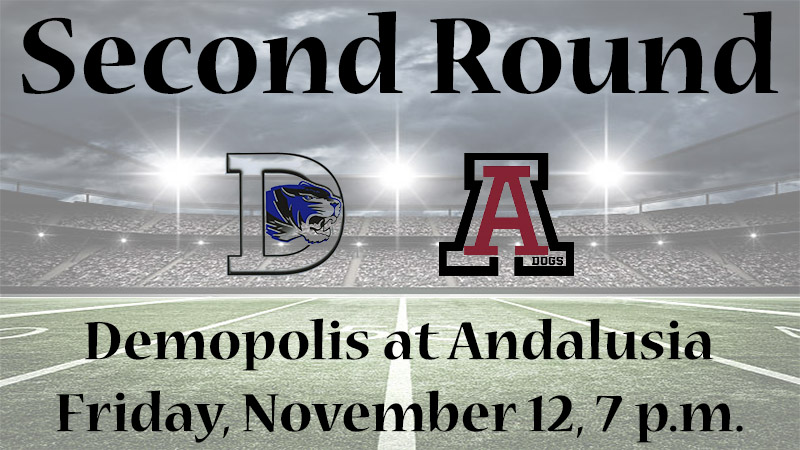 After delivering a big first round win on the road last week, Andalusia (7-4) returns home for round two of the 5A playoffs against Demopolis (7-4) Friday, Nov. 12 at 7 p.m.

Both teams began the postseason on the right foot. The Bulldogs made the trip to Sylacauga and had over 500 offensive yards in a 42-7 win. The Tigers dispatched B.C. Rain at home, 49-7.

“We played a complete game, which is all you can hope for especially in the playoffs. We’re really, really proud of the effort our guys played with. We had a couple miscues and allowed Sylacauga to stay on the field almost the entire first quarter,” Head Coach Trent Taylor said. “When it was all said and done, we did what the goal was and kept them out of the end zone.”

The two teams meet for just the third time overall and their first encounter in the playoffs. AHS holds a 2-0 lead in the series with regular season wins in 1978 and 1979.

Brian Seymore, who previously coached at Andalusia from 2008 through 2014, is in his fifth year at Demopolis. DHS is in its 39th playoff appearance with an overall record of 44-36. The Tigers have a 12-8 second round mark and are 5-2 on the road. The Bulldogs are 10-3 in the second round with a 6-1 home record.

“(Coach) Brian (Seymore) does an outstanding job on the defensive side of the ball. Demopolis has always been very athletic, and this year is certainly no exception to that. Defensively, they’re probably as good as any team we’ve played this year. They’re super aggressive and run to the ball extremely well. They’re exactly what you want your defense to do and are really talented up front. They have three defensive linemen who are really good and also very huge. They don’t get too fancy with it. Their quarterback does a really good job of managing the game and gets it to their playmakers out on the edge.”

Each team reached the second round in 2020 before bowing out of the playoffs. Andalusia dropped a hard-fought contest at Central-Clay County, 28-21. Demopolis hosted Faith Academy but had trouble on the offensive side of the ball and fell 31-6.

The winner of this game advances to the quarterfinals against UMS-Wright or Greenville next week.

“It’s always good to be at home. We’ll have a great crowd no doubt, and hopefully, we can give them something to cheer about every now and then,” Taylor said.