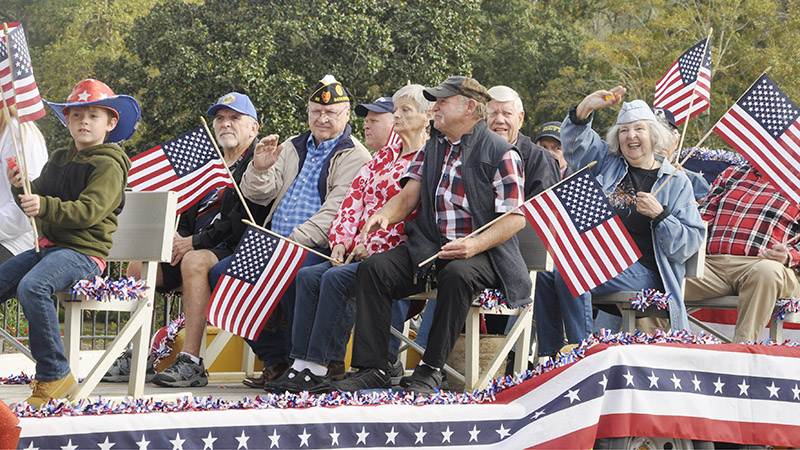 A Veterans Day parade float carries veterans and their families.

The Andalusia Area Chamber of Commerce and City of Andalusia paid tribute to veterans for their service with a parade and ceremony Thursday morning.

The Chamber had its biggest showing with its annual Veterans Day Parade, which ran from 3rd Avenue and ended at Andalusia City Hall with a wreath-laying ceremony at the Covington Veterans Monument. 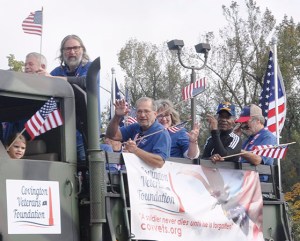 The Covington Veterans Foundation rides in the Veterans Day Parade sponsored by the Andalusia Area Chamber of Commerce.

“Last year’s parade was cancelled due to the pandemic. We were really excited to be back this year, and there was a great turnout for the parade. It was the first one I put together, but I am honored to pay tribute to our veterans and their families,” Executive Director Laura Wells said. “I look forward to holding the parade each year and hope it will continue to grow.” 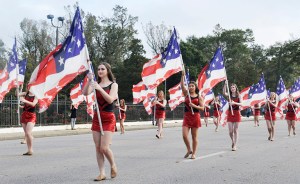 The Andalusia High School Colorguard represented our nation by twirling the stars and stripes of the United States of America flag.

Sam Nichols served as the keynote speaker at the ceremony. Rev. Frances Crittenden said the opening invocation and prayer followed by the Pledge of Allegiance by Brian Foshee. The Andalusia High School Marching Band performed the National Anthem. City of Andalusia Mayor Earl Johnson welcomed Nichols to the podium and said the two were classmates and close friends while growing up.

Nichols is a retired educator and Vietnam veteran. He is a 1965 graduate of Andalusia High School. “I came back to my hometown after so many years being away. I am so proud to be given the opportunity of growing up here. There were so many things I learned and still cherish to this day. To be able to come back and share my heart with the home folks means an awful lot,” he said. 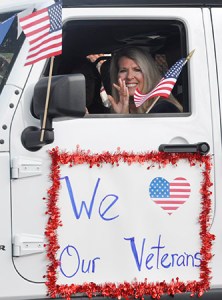 Jennifer O’Neal is all smiles about showing support for veterans and their families during the parade.

In the fall of his freshman year of college, he left Troy State University and joined the United States Marine Corps. He reported to Parris Island, South Carolina, for training in January of 1967 and was deployed to South Vietnam in August of that year.

He recounted memories from his time serving in the Vietnam War.

“It impacted my life in ways I probably will never know. It was one of the greatest experiences I have ever had. The saddest part was when I came back, guys would claim their gear, but there was always sea bags left, and those are the guys that didn’t make it home. That was certainly a sad, sad reminder of what toll this war took. We always carried a little C4 with us, and if you’re not familiar with it, that’s explosive. You had it in a plastic bag and carried it with you to heat up your meals. You didn’t want to make the ball too big though and it become extremely hot and burn extremely fast. That was essential, and almost everybody had dog tags around their neck as well,” Nichols said. 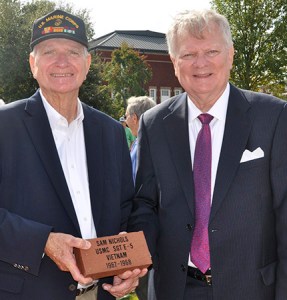 Retired educator and Vietnam veteran Sam Nichols is presented with a brick in his honor by City of Andalusia Mayor Earl Johnson.

After a year in country, he was stationed in North Carolina until his enlistment ended. While serving, he was promoted to the rank of Sergeant (E5) and awarded numerous service medals and ribbons.

“It means everything to serve our country. It was a life-changing opportunity for me to be able to serve and do my part to preserve what we have in this great country we live in,” Nichols said. “I just want to remind everybody that freedom is not free.” 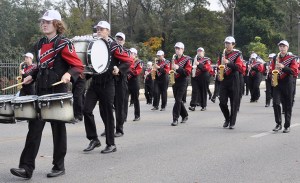 Andalusia High School’s “A Sound Tradition” Marching Band performed patriotic songs in the parade and played the National Anthem at the wreath-laying ceremony.

After leaving the service, Nichols returned to Troy State to resume his education. He spent 37 years in public education, most of which was in Dothan City Schools, where he retired as superintendent. He and his wife, Ellen, have three daughters and five grandsons.

“I could go back and give you a life story when I went to high school and came across this playground to get to my house. I could be home in about 15 minutes if I ran. I have a lot of precious memories and friendships that have lasted a lifetime. Just to be able to come back and have the opportunity to share this community being such a big part of my foundation means an awful lot. Having my family’s support is priceless and cannot be taken away. I have been with my wife for 50 years, and it means so much,” Nichols said.

Wreaths were laid in memory of those who died; of POW/MIAs; and Medal of Honor winners, specifically Covington County’s only MOH winner, Rodney J. Evans. 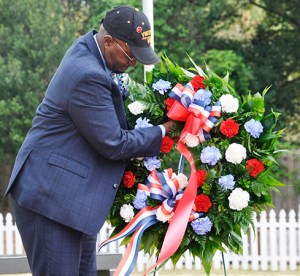 Teddy Hill, an Army veteran who served in Vietnam, lays a wreath at the POW/MIA Ceremony sponsored by the City of Andalusia.

Local classrooms have new way to engage through tech