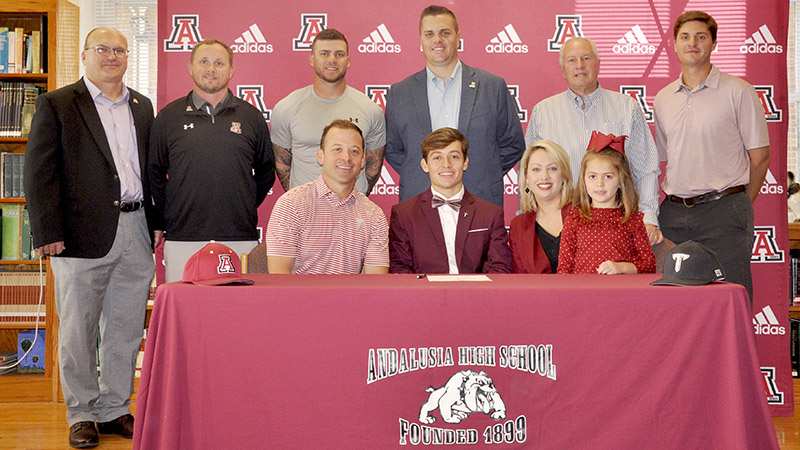 “I have played baseball my entire life and for as long as I can remember. It has always been such a big part of my life. There hasn’t been a time that I haven’t played ball,” he said. “I have gone from T-ball at Johnson Park to competitive summer ball all over the country.” 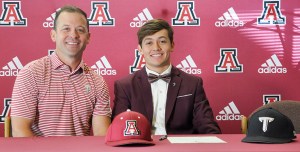 Chase Amis, left, was a shortstop for Troy’s baseball team in the early 2000s; his son Ayden will pursue the same opportunity.

Amis said he enjoys the competition the sport offers. “I enjoy baseball being a sport where you have a specific role and job to do. If you are having a down day, the ball will find you. You have to be on your game every pitch or you’ll get exposed. That’s the game.”

The Bulldog middle infielder will not have to travel far after his high school graduation next May. Amis plans to major in Pre-Law with a minor in Broadcast Journalism.

“Troy University has always been special to me because it’s where my dad played shortstop for the Trojans. I’ve attended camps at Troy since I was 5. I am familiar with the program and its legacy. There was never a doubt that I was meant to be a Trojan,” he said.

Amis added that the facilities at Troy and the success of their athletic programs on a national level are top-notch. “The numerous upgrades campus-wide are as impressive as any schools in the Southeast. I have been a Troy fan my entire life, and both my parents are alumni of Troy University.” 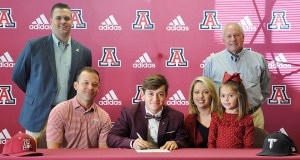 This opportunity will allow him to continue making memories of playing the sport he is passionate about. “I have always set high goals for myself, and I plan to be an asset to the Troy University baseball program the first day I step on the field. I dream of winning a Sun Belt Conference championship and helping lead Troy to the postseason year in and year out,” he said.

Following in his father’s footsteps means a lot to Amis and his loved ones.

“The Troy baseball program is special to my dad and the rest of our family. The best way to honor my supporters and the people who have invested in my baseball career would be to give 100 percent on the field, in the classroom, and in the weight room. My dad was lucky enough to play for Coach Bobby Pierce and Coach Mark Smartt and holds them in such high regard. I am excited for the opportunity to help Coach Skylar Meade and his staff in continuing the program’s winning tradition,” he stated. “The most important thing to my dad would be for me to leave my own legacy.”

Amis will begin his senior baseball season in February under the leadership of AHS Head Baseball Coach Tyler Dent. “First and foremost, I am excited to have the opportunity to play one more season for Coach Dent alongside my best friends. Going to work every day with these guys is an experience that I will always look back on,” he said.

Being under Dent’s leadership has made a huge impact in his life. “Coach Dent has always supported me and believed in me, and for that, I am truly grateful. He expects nothing but my best effort every day. He’s hands down one of the best coaches in the state of Alabama, and his resume proves that,” Amis said.

Dent spoke highly of Amis and praised him for his efforts on the baseball field.

“Ayden is absolutely one of the most hard-working, amazing kids I’ve coached in my 10 years of being a head baseball coach. I don’t think he’s ever had a bad day. He always has a smile on his face. He was the starting second baseman on the 2018 championship team as an eighth grader. I have a picture of the dogpile at the end, and he was a short, little stumpy eighth grader with a lot of baby fat on him. Now, he’s turned into a tremendous athlete and has played such a pivotal role in our success in football this year. He has been a staple in our baseball program for five years. He caught for us in 2020 and did a tremendous job behind the plate for Jacob Cravey when he pitched. He is an elite shortstop and a tremendous leader,” Dent said.

When asked about his biggest accomplishment to this point, he was quick to answer. “That’s easy: winning a state championship.” Andalusia knocked off Hokes Bluff in the title game, 10-6.

His parents and loved ones have been his biggest fans throughout his baseball career. “Playing sports teaches you a lot about life. You have good days and bad days. No matter what, my family was always there to cheer me on and support me. They never doubted me,” he said. 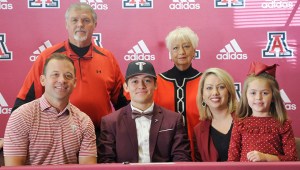 He is the son of Chase and Amber Amis and has a younger sister, Joy Marie. “God has blessed me with great opportunities. I just pray that in all things I do I am faithful to His purpose for my life,” Amis said.