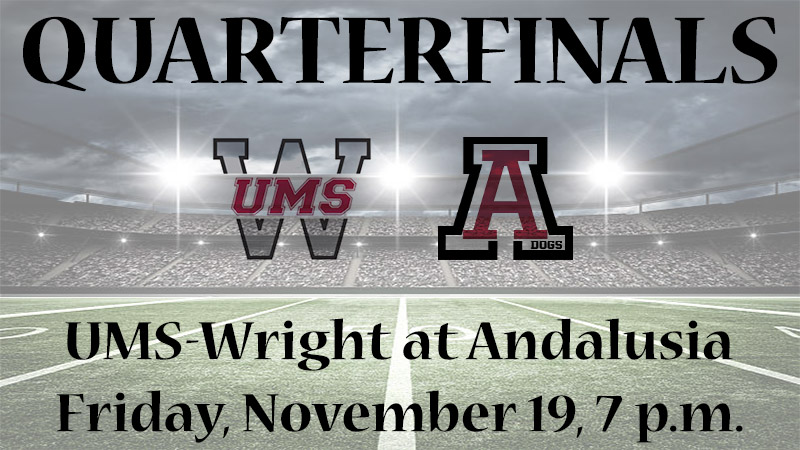 AHS used a powerful rushing attack to oust Demopolis 48-26 in the second round. UMS led by a touchdown at halftime against Greenville and held on for a 14-12 win.

“We gave up some plays, but it’s just playoff football. When you get to this point in the year, turnovers are the key, which can also be said about any other game. We had one where we turned the ball over to them, but I can think of two for sure. We intercepted a pass, but I think the play of the game was the scoop and score. When you get those and take advantage of them, that was the turning point.”

Taylor added that they have been practicing football for 15 weeks now.

“Everybody is in the same boat and a little banged up. Other than losing Bailey (Faulkner), we’ve been fortunate none of our other injuries have been serious. I think you have to be smart this time of the year and have to get your work done. We’re not going to change a whole lot about what we do as far as practice is concerned. You don’t want to change because then they sense there’s change,” he said. “I think the mentality is one game at a time, and the seniors are accustomed to playing football at this point.”

This third round contest marks the 20th meeting between the two sets of Bulldogs. UMS-Wright has an 18-1 lead in the series, which first began in 2000. Andalusia’s win was a 2017 overtime thriller at home, 27-21.

“The truth of the matter is winning is contagious, but so is losing. When the expectations are to get in the playoffs and perform, I’ll be honest with you. We had two tough ones against Crestview and Greenville who are really good football teams. We lost both by eight points or less but played extremely hard. We came back Week 9 and really started to play a different brand of football against Ozark that has carried over into the playoffs,” Taylor said.

Andalusia faces a familiar foe in UMS. While this will be the first quarterfinal encounter, they have met in the semi-finals three times.

“Terry (Curtis) and his staff do a fantastic job. They’re well-coached and not doing anything different. Just the kids doing it are different. There’s a wrinkle or two here or there, but he’s like any good football coach. You have to adapt to your personnel. Some years, you may have two really good receivers. Other years, you may have two good running backs. Whatever the case may be, you have to adapt, and I don’t know anybody who does that better than Terry Curtis. He probably said the same thing. We’ve changed offensive coordinators but are who we’ve been since day one. We’re going to run the football and defensively will be in an odd front,” Taylor said.

With only eight 5A teams remaining, this matchup features two veteran coaches as Taylor and Curtis have combined for 588 wins. Taylor is in his 34th season and seventh with his alma mater. Curtis is in his 33rd season overall and 23rd at UMS-Wright.

Andalusia makes its sixth third round appearance under Taylor. AHS is 5-2 all-time in the quarterfinals and 1-0 at home after a 24-0 win over American Christian in 2019.

The winner of this game will advance to the semi-finals against Faith Academy or Pike Road next week.

“The best thing is we don’t have to travel to Mobile, and they have to travel to Andalusia. Anytime you can be at home, it’s huge. Our crowd has been fantastic this year. Win or lose, I think every game we have played has been exciting to watch. It should be a lot of fun,” Taylor said.