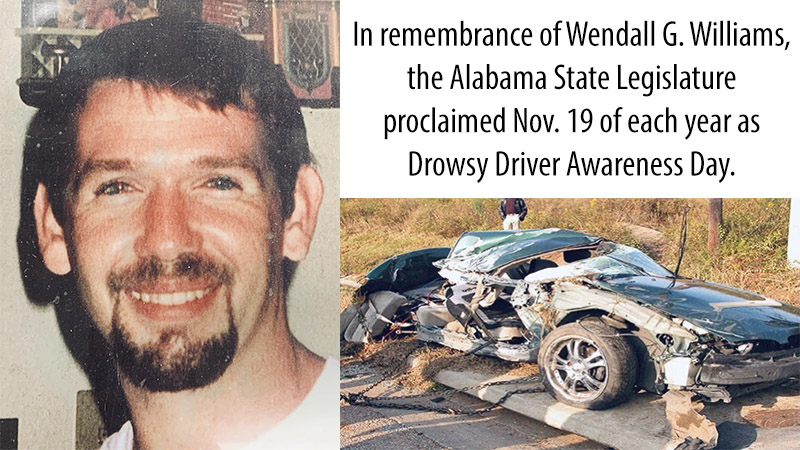 Nov. 19, 2006 is a day that will forever be etched in the mind of Shelia Faulkner, who lost her son Wendall G. Williams in a tragic accident.

At the time, Williams was only 28 years old when he was killed in a horrific car crash as a passenger on an early Sunday morning. According to police reports, the driver of a green 2001 Nissan Altima was sober but evidently had gone without sleep between 22 and 30 hours. The driver fell asleep at the wheel as the vehicle ran into a pole at a local railroad crossing. It has now been 15 years since the incident occurred, and the driver has yet to receive a single citation for the actions.

“Wendall was the sweetest, kindest person you’d ever want to meet. He had a big heart and would do anything for anybody. He was very humble,” Faulkner said.

Faulkner reached out to the Alabama State Legislature, who first proclaimed Nov. 19 as Drowsy Driver Awareness Day. This year will mark five years since that proclamation was passed in 2016. She has sought justice for her son on numerous occasions.

According to the proclamation, the National Highway Traffic Safety Administration estimates that 100,000 police-reported vehicle crashes occur per year resulting in approximately 1,550 fatalities and 71,000 injuries. Most are attributed to the cost of driver fatigue.

A poll by the National Sleep Foundation found that 60 percent of all adults surveyed admitted driving a motor vehicle while drowsy. 37 percent of the same adults reported falling asleep at the wheel while driving. Between 2013 and 2017, more than 4,000 people were killed in car crashes in which drivers fell asleep or were too sleepy to safely operate a vehicle.

“I want to make the public aware of this situation because it is a very serious thing. There are now road signs on interstates and near rest stops instructing citizens to pull over if they feel drowsy,” Faulkner said. “My son was a victim of something that was beyond his control.”

The proclamation also stated that Alabama has no roadside test for a person to complete or for law enforcement to administer to determine whether a driver is too tired to drive. It goes on to read that many crashes attributed to alcohol or other causes may actually be the result of a sleepy driver.

“People should be responsible for their actions. When you get behind the wheel, you’re responsible for having a license, insurance, and accountable for all the people in the vehicle with you,” Faulkner said.

Both the Victims of Crime and Leniency (VOCAL) and the Traffic Safety Resource Prosecutor Program coordinate their efforts to increase the public’s awareness of the dangers presented by drowsy driving.

Nov. 19 was designated as Drowsy Driver Awareness Day in Alabama as a continuing memorial to the many other loved ones who have suffered the same fate.

The proclamation adds that it also serves as an annual reminder of the tragic consequences of fatigued driving. It closes with a statement saying, “In observance of the day, the public shall be educated on the danger of driving drowsy and the many ways of preventing vehicular crashes related to drowsy driving in the future shall be emphasized.”

For more information call Shelia Faulkner at 334-343-1197. “I miss him and think about him every day. Nothing is ever the same, but he is not forgotten. I put up my Christmas tree every year and try to do things good in order to feel closer to him,” she said.