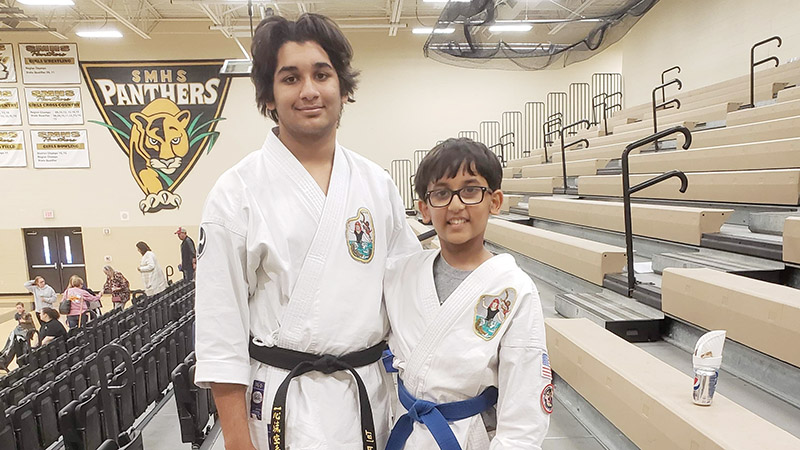 Taj Patel, left, competed in a youth karate tournament in Tennessee last weekend and was named the Grand Champion. His younger brother, Dhilan, has reached blue belt status and is following in his older brother’s footsteps.

Karate has been 16-year-old Taj Patel’s forte as he earned the title of Grand Champion at the Youth Karate Tournament in Crossville, Tennessee last weekend.

Patel first began practicing karate in the summer of 2010 when he was five years old.

“At a young age, I wanted to ‘be Superman’ and decided to start doing karate to help achieve that goal,” he said.

He added that receiving this recognition was no different than his previous competitions. “Since I have won many Grand Champions in my karate tenure, this title does not mean as much to me as it would to others. That being said, I definitely still am proud to win this title, but instead of sufficing with just this title, I try to enhance my abilities even more so I can win more like this.”

According to Patel, you must remain focused and have concentration during the sport. “In some aspects, karate is basically a fight, whether it is mental or physical is not up to you as it involves both. If you imagine that you were in a fight, it is a given that you should be focused and that you had your undivided attention upon the fight. I believe the same goes for karate.”

His path to achieving a black belt all began with his sensei Mark Rudd.

“Through his training all these years, I have learned so much about karate, and he has also helped me become a better person. Perseverance, devotion, and diligence are key traits to achieving the black belt status in Mr. Rudd’s dojo. I was a dedicated student; I only missed classes when I absolutely had to. This dedication and devotion paid off, and I also believe that competing helped me become a better black belt. This being said, competing in tournaments is not everyone’s cup of tea, which is perfectly acceptable,” Patel said. “I have known numerous black belts who would rarely compete, yet those black belts were some of the best teachers that I have met.”

Patel hopes this experience will continue into his adulthood. “If my future occupation allows it, I would like to open up a dojo of my own and teach Isshinryu wherever I live,” he said. The most exciting part of the competition for him was Kumite (sparring).

His family means everything to him. “Their support is a driving factor in my life. They help push me to my potential and help me strive to become a better person.”

Patel is currently a junior at Straughn High School. After he graduates in May 2023, he plans to attend UAB and pursue an undergraduate degree in Neuroscience. He has aspirations to attend medical school and eventually become a neurosurgeon.

When asked if he had any advice for karate first-timers, he said to come inside the dojo and watch a class, but it entails a lot more than just watching. “If you want to be a part of the class, you are welcome to. Classes for beginner, intermediate, and advanced students are on Tuesdays and Thursdays. Beginner classes begin at 4:45 p.m., intermediate begins at 5:40 p.m., and advanced classes begin at 6:50 p.m. Classes are also available on Wednesdays at 4 p.m. for children who are ages four and five.”

Patel is the son of Neil and Binita Patel and has a younger brother, Dhilan.

“We love to see him compete, and he gives it his all no matter if it is Kumite sparring or kata empty hand or weapons. He loves to teach the younger kids and make them better karateka. He is a great role model to his brother and his school. We are blessed to have such a smart, humble son who will help better this country in the near future. We are proud of the leader he has become in our school, community, and karate family throughout the United States,” his parents said.