The Brabham family who had descendants to settle in Covington County, Ala., was introduced in last week’s column. The lineage was outlined from the earliest ancestor believed to have sailed from Wales down to Archibald Brabham who migrated to Pike County, Ala., before 1840. The family of his fourth son, George Cornelius Brabham, b. 1833 in South Carolina, will be featured in today’s column. 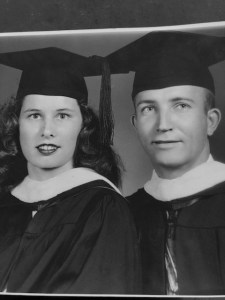 Charles’s youngest son, Charlie Clifford Brabham, was born in 1893 and died in 1949. He married Ida Crow (1893-1995), and they made their home in Coffee County for a number of years; however, they later moved to Florala, Ala., where he managed a dry-cleaning business. They became the parents of two children: Miriam Irene, b. 1921, d. 1971, m. ? Gardner; and Clifford Crow, b. 1926, d. 2009, m. Shera LeVan. Clifford and Shera were the parents of three children: Annette, Charles Arthur, and Cindy Scaborough. Charlie Clifford was living in Valparaiso, Fla., when he died in 1949.

The third son, Robert Clifton Brabham, was born in 1925 in Coffee County. He is the Brabham descendant who will best be remembered by the citizens of Andalusia and surrounding communities. Cliff rendered military service in the U.S. Army Airborne Infantry during World War II. Afterwards, he completed his bachelor’s degree with math major at Troy State University and later, a master’s in educational administration at Peabody College in Nashville, Tenn. He began his career in education at Summerdale Junior High School in Baldwin County, Ala., where he taught for five years. His next tenure was five years at Stockton High School where he was named “Principal of the Year.” He then became Assistant Principal at Robertsdale High School, and from there he transferred to serve a short time as Principal of Geneva High School. He then became Assistant Principal at Ft. Rucker High School. Around the Fall of 1966, he moved to Andalusia to serve as Principal of Church Street Elementary School. He continued in that role for 22 years before retirement, and enjoyed managing his farm between Glenwood and Goshen. He passed away in 2010 and was buried in the Andalusia Memorial Cemetery.

In 1950, Robert Clifton Brabham was married to Danabel “Dannie” Linton, who also became a teacher. They were awarded their masters degrees at the same time from Peabody College. After they moved to Andalusia, Dannie taught one year in the Opp City Schools. In the fall of 1968, she became one of the four teachers at the new public kindergarten in the Andalusia School System where she taught for several years. She and Cliff enjoyed their careers in education and serving their community. They have a son, Shannon Clifton Brabham, who with his wife, Leigh, who is a pharmacist, reside in Waynesboro, Miss., where he works in the field of forestry. The couple is the parents of three children. Later Cliff and Dannie adopted a two-months old daughter, Sheila Brabham, who married Steve Golden who is now deceased. Sheila and Steve have three children and have made their home in the Goshen community of Pike County.

Mary Jane (Dykes) Weaver’s book, Dykes and Kin of Yesterday and Today, was the major source along with Ancestry.com for today’s story. Mary Jane is a Brabham family descendant.