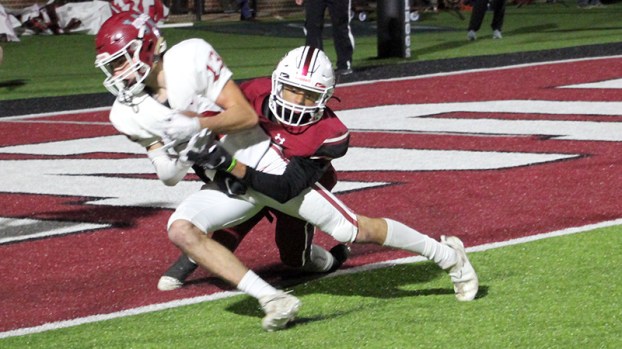 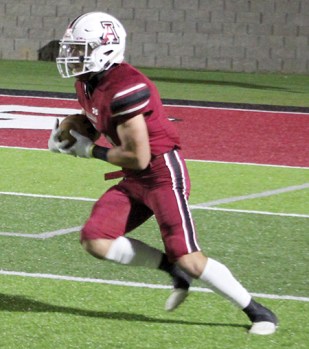 Joseph Turner opened the game with a 90-yard kickoff return to give Andalusia early momentum against UMS-Wright. 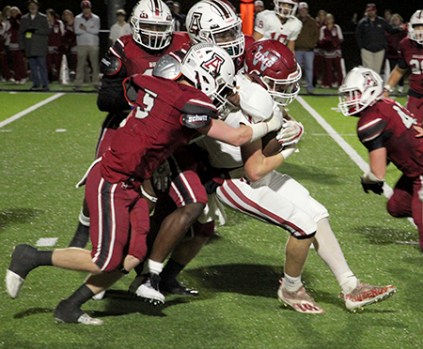 The Andalusia defense was on fire all night in a quarterfinal win over UMS-Wright. 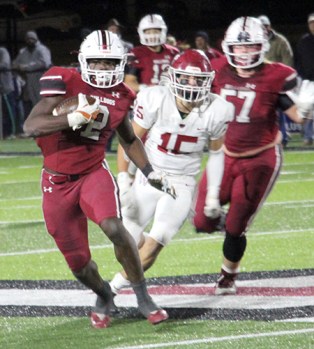 J'Marion Burnette powers forward for a big gain on offense. 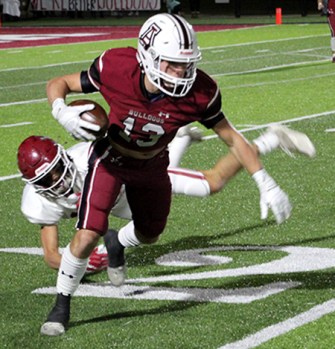 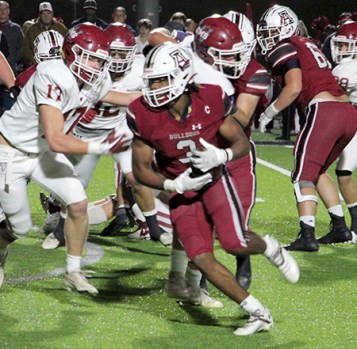 Omare Latimer seeks an opening on a run play. 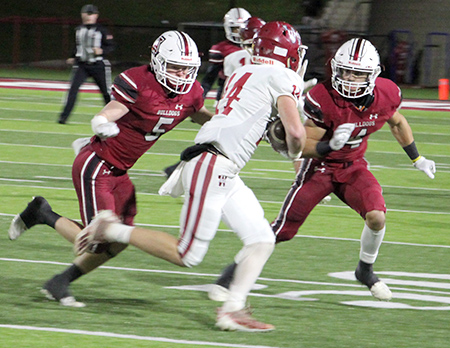 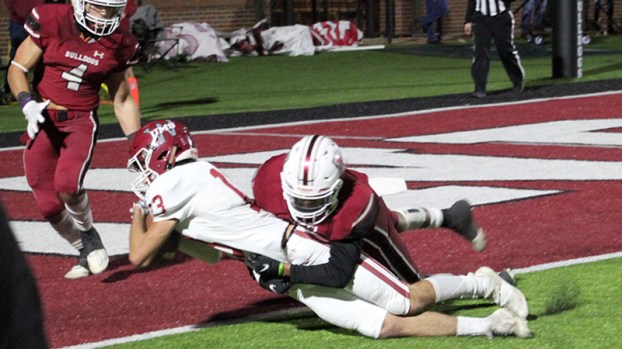 Andalusia picked the “Wright” time for victory number two against UMS and advanced to the 5A semifinals with a thrilling, hard-fought 20-14 win Friday night.

The contest came down to the final play as Jordan Hart tackled Joseph Roberson just shy of the goal line to preserve the win as time expired.

Head Coach Trent Taylor said his team did what they had to do.

“We tried to hold the ball as long as we could before we gave it back and knew they were going to mount a drive. They’re a great football team, but to come up with a stop like that when you got two starters on the sideline in the secondary is huge. I’m proud of each and every one of them. The defense played outstanding, and we live to play during Thanksgiving.”

Joseph Turner opened the game with a bang, taking the opening kickoff 90 yards to the house. Cole Morgan’s PAT gave Andalusia a 7-0 lead only 17 seconds into the game. After a good return by UMS, Cole Blaylock had a 12-yard first down run. Andalusia appeared to stop UMS on third down but was flagged for pass interference resulting in a new set of downs. Pfilip Hunt had a 22-yard run before a 1-yard score by Blaylock. Barton Elliott’s PAT drew UMS even at 7-7.

J’Marion Burnette ran for 16 yards on AHS’s first offensive play and followed with a 26-yarder. Omare Latimer scored from 13 yards out as Morgan’s extra point gave Andalusia a 14-7 lead at the end of the first quarter.

On their next possession, Ayden Amis went to the air with consecutive first down passes to Lucas Jordan and Latimer. Zavier Hamilton kept the drive alive with a clutch 15-yard third down grab. Morgan made the lead 17-7 with a booming 46-yard field goal.

The defenses shined until the final minute of the half. Elliott had a 17-yard run into positive territory and set up a 2-yard touchdown run from Blaylock. Grant Carpenter trimmed the UMS deficit down to three with the PAT as Andalusia led 17-14 at halftime. UMS seemingly converted a fourth down on a fake punt attempt, but the play was nullified due to a penalty. Andalusia regained possession with just over 5 minutes in the third.

Burnette surged into visiting territory with a 13-yard third down run and bounced off would-be tacklers to the opposing 20. After Latimer scampered 10 yards for another first down, Morgan nailed a 25-yard field goal for a 20-14 lead with 12 minutes left. UMS rolled the dice on fourth down, but Garrett Blackston delivered a critical tackle for loss. Burnette kept the next drive alive for Andalusia with critical conversions. A 47-yard field goal by Morgan was no good, giving UMS hope. Elliott fired a 32-yard pass to Joe Lott in between two defenders for a first down and an 11-yard strike to Jacob Jaye at the 6, which set up Hart’s game-clinching tackle as time expired.

The win snapped UMS-Wright’s 11-game winning streak and propelled Andalusia into the semifinals next week in a rematch against region foe Pike Road (12-0). “We don’t care [who we are playing]. We are just glad to be here,” Taylor said.