American Native Indians lived in what is now the present state of Alabama. Many many years ago, they led a Stone Age lifestyle using stone tools and weapons. In addition, they had never seen a horse and had no knowledge of the wheel until the Europeans arrived.

There are many famous Native American tribes who played a part in the history of the state and whose tribal territories and homelands are located in the present day state of Alabama.

The names of the Alabama tribes include the Alibamu, Tunica, Cherokee, Chickasaw, Choctaw, Koasati, Creek (Muskogee), and Yuchi. The natural resources and material available provided the food, clothing, and houses of the Alabama Indians. The principal way of life for these Indians was as hunter gatherers and hunter farmers clearing land for agricultural purposes.

The way of life of Alabama Indians was profoundly affected by newcomers to the area. The indigenous people had occupied the land for thousands of years before the first European explorers and colonists arrived in the 1500s. The Europeans brought with them new ideas, customs, religions, weapons, transport (horse and wheel), livestock (cattle and sheep), and diseases such as smallpox, measles, typhus, chicken pox, cholera to name a few for which Native Americans had no immunity.

The Trail of Tears beginning in 1832 was the name used to describe the 1,000-mile route, sad and appalling, that the Indians were forced to travel from their homelands in the Southeastern United States to reservations in present day Oklahoma. This long journey of misery, sickness, and death was as a result of the 1830 Indian Removal Act, the first major legislation that reversed the U. S. policy of respecting the rights of those ill-prepared American Indians. It is documented that there were Indians, individuals and groups, who hid out and did not go on the forced journey.

Skipping forward – While today, although the Band of Poarch Creek Indians dominate headlines, there are believed to be nine state-recognized tribes scattered across the state operating in Alabama.

Recently, a 1924 elementary textbook was given to the Three Notch Museum, “History Stories of Alabama.” This book of stories compiled by Mrs. Pitt Lamar Matthews belonged to 4th grader, Inez Riley, whose name was written in the front. In a child’s cursive was written in pencil, “Don’t forget to bring 10 cents for the puppet show.” The little book contains a collection of stories that a child almost 100 years ago would enjoy. Because this is Thanksgiving week when we think of pilgrims and Indians, I would like to share one of those stories for you readers. Maybe you will read it to your children or a visiting grandchild. 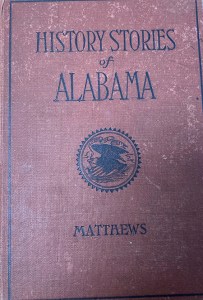 “Little Tempey Ellis was a little girl who lived in Georgia. At this time, Indians were everywhere. Often a band of them would rush upon a settler’s home, murder the settler and his family, steal what they wanted, and burn what was left. It is no wonder that in those days, children were afraid to play away from their parents.”

“When Tempey was only six years old, she went to visit the children of the Scarlett family in the wilderness. While she was there, a band of Indians fell on the Scarlett cabin without any warning and killed all of the family. Poor little Tempey hid under the bed. She was so afraid that her little heart almost stopped beating. Of course, a cruel Indian went about the house looking for anyone who had hidden, and he found her under the bed. He dragged her from her hiding place and was about to kill her. Then he changed his mind and instead of doing so, he carried her away to keep her until someone would pay for her.”

“The little girl was kept by the Indians for more than a year. She did her best to be a good child so that they would not kill her. She wanted her mother all of the time, but she was afraid to cry about it.”

“At that time, an old woman whom everyone called ‘Old Milly’ lived in Alabama. She lived all alone, and if she had any relatives, no one knew them. One day a traveler told Old Milly that a band of Indians who were camped near the village of Autosse had a little white girl with them. Old Milly told the traveler that she would find out if this were true; so she saddled her horse and rounded up ten horses and six good cows. She drove these animals to the Indian camp near the village of Autosse and there traded her animals for the little white girl.”

“When little Tempey heard her name called by an old squaw, she ran as fast as she could to see what was wanted.

As she came up, Old Milly held out her arms to the lonely little white child. Tempey climbed up on Old Milly’s horse and was soon riding away.”

Tempey lived with Old Milly for several years. She tried in every way she knew to thank her for her kindness. The old woman loved the child and would have kept her as long as she lived, but she knew that the child’s mother must be grieving for her somewhere in Georgia. This made her decide to send Tempey home.”

“One day the Creek Indian agent stopped at Old Milly’s house for rest and something to eat. He promised to take Tempey home to her parents in faraway Georgia. So Old Milly packed the girl’s clothes in a box and sent her home. Then the unselfish old woman went into her lonely cabin and wept.”

“Tempey Ellis grew to be a pretty young girl. She was married when quite young to Thomas Frizzell of Alabama. They lived for a long time in Pike County. When she was an old woman, her home was near Troy, Alabama. Her grandchildren still live in south Alabama, and they delight to tell their children how ‘Grandma Frizzell’ was bought from the Indians for ten ponies and six cows.”

Another story in the little textbook gave this explanation to school children about the Indians. “No doubt, you have wondered why the white men had so much trouble with the Indians. As time passed, the white men were taking more and more of the Indians’ hunting grounds and farm land. Perhaps these Indians realized that some day, they might be driven out if they did not fight off these white settlers.”

So there is a little history of Indians in Alabama and the Southeast. As a former music teacher of Kindergarten and elementary grade students, I remember one of those favorite songs we sung to teach children to music the numbers of one through ten – “One Little, Two Little, Three Little Indians.” I imagine that the song goes back to the one-room schoolhouse days of Alabama pioneers or even wagon train days.

Happy Thanksgiving to you readers. Thank you for your letters and messages. It is fun to Remember When.