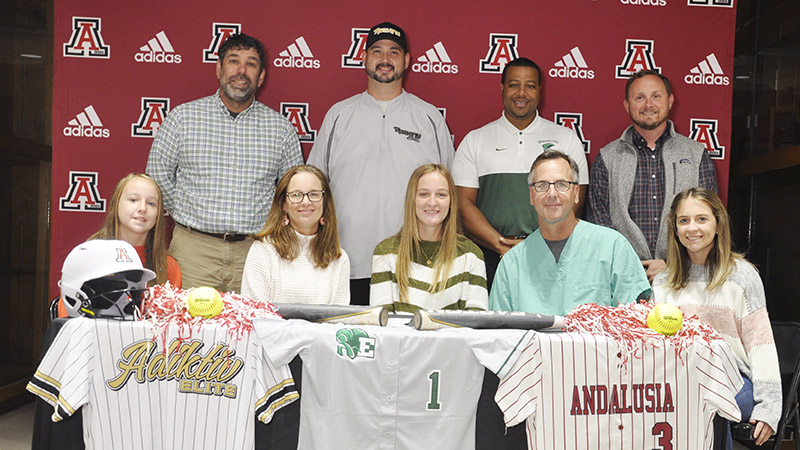 Softball has been a big part of her life since she was young. She started taking pitching lessons at the age of eight and has consistently played travel ball. 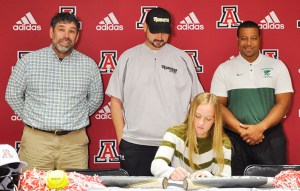 “I started playing softball when I was five years old and have been playing ever since. I am a very competitive person. I have always enjoyed the intense competition that softball brings,” Furr said.

She is looking forward to becoming a member of the Boll Weevils. “ESCC is a great fit for me due to the fact that it is close to home. It provides independence for me and allows me to continue my softball career in a new environment,” she said.

Furr added that Enterprise State was a great fit because she loves the small school environment. She is currently undecided on what her major will be after ESCC but is considering a Journalism or English degree. 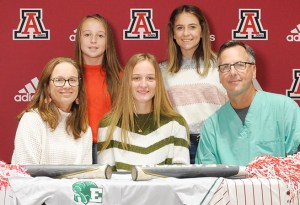 Maggie Furr and her family are looking forward to the opportunity of college softball at ESCC.

“The classroom setting is going to allow me to keep my focus while also committing to my sport. I plan to transfer to a four-year university afterward in order to complete my schooling.”

She has high hopes in her final high school season with Andalusia under the guidance of AHS head coach Anthony Mikel. “I look forward to having a great season with fellow seniors and enjoying our last go-round on the dirt together,” Furr said.

“Maggie is a terrific young lady and has grown a lot. I’ve known her since she was probably five years old from playing park ball. She started with us as a seventh grader and has grown tremendously. She has an unbelievable work ethic and loves the game and her teammates. It’s been a privilege to coach her. I honestly believe Maggie will be a pillar and an asset to Enterprise State as she has been to us at Andalusia. I wish her and her family all the best. I hate to see her go, but she has to spread her wings and will reach the moon,” Mikel said. 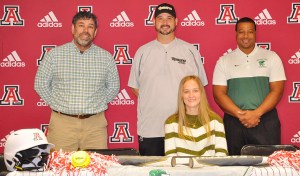 Playing under Mikel’s guidance has laid the groundwork for competition at the next level. “Coach Mikel has always been one to help me calm my emotions in tough situations. I’m thankful for him because he never fails to remind me to play for the love of the game,” she said.

In addition to playing with Andalusia, Furr is also a member of the Adiktiv Elite Travel Ball team. “I’m also thankful to my Adiktiv Elite travel ball organization for allowing me to grow in the game,” she said.

“When Maggie joined our pitching rotation, she quickly became one of our strongest arms and got us through tough situations. She was also a starting outfielder and pretty much never left the field. She has been a huge contributor and has always batted high in the lineup with a great presence at the plate. The biggest thing I can say about Maggie is her character. She is willing to do anything to help her team. I love how she is a really big competitor who wants to win at all costs. She has been raised the right way with a very dedicated family and makes a great teammate. Kids these days are more about me, me, me, whereas Maggie has always been about the team. She is as happy for her teammates’ success as her own,” he said.

When asked about her biggest accomplishment so far, Furr said her academics were important to her success. “I have been able to maintain great grades while enrolled in honors classes. I have also had consistent training to excel as a softball athlete and prepare for my future.”

She has been very appreciative of her family throughout her softball journey. 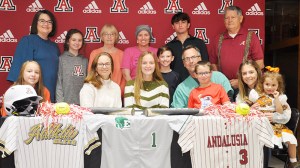 Maggie Furr relishes in the moment of becoming a future Boll Weevil with her extended family.

“My parents and grandparents have supported me from the beginning whether it was driving me hours away for tournaments or hitting me softballs in the backyard,” Furr said. “I wouldn’t be who I am today without them.”

Furr poses as a dual-threat with the Lady Bulldogs and plays a number of positions. When she is not in the circle, she fields positions at first base, left field, or right field.

She is the daughter of Willie and Amanda Furr and has two younger sisters: Mollie and Madelyn. “Softball is extremely close to my heart, and I’m thankful to be continuing my love for the game at ESCC,” Furr said.