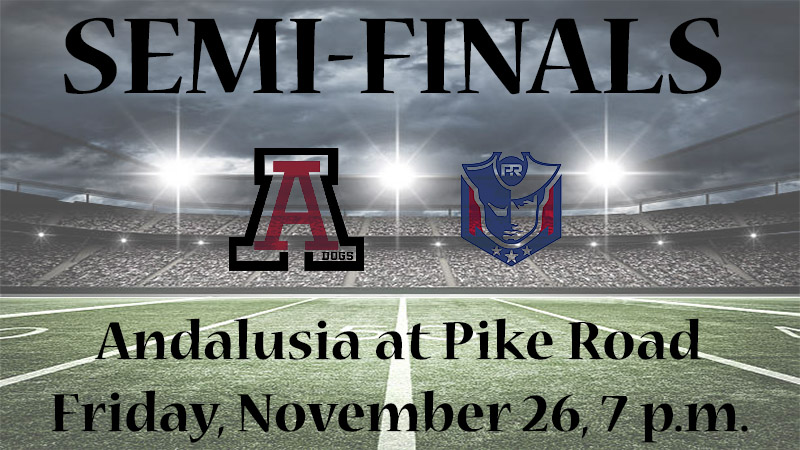 The Bulldogs withstood a late push by UMS-Wright for an incredible quarterfinal win last week, 20-14. The Patriots made their trip to Mobile worthwhile with a 42-0 win at Faith Academy.

“We started the game with a big special teams play, which was something we had really emphasized all week. We had meetings with all of our special teams and discussed what we felt like had been weaknesses on our part. Credit to Coach (Peyton) Whigham for coming up with a kickoff return scheme that we thought we could possibly hit. Things went a little bit different than what they (UMS-Wright) had done all year really and truly. They usually kick the ball to their sideline and actually kicked it away. Their kids still showed a lot of effort and all of our kids were engaged. Joseph (Turner) did a good job of running the football on returns.”

He felt the Bulldogs started well on offense despite seeing some changes defensively from UMS.

“Anytime you play a UMS team, they’re so well-coached. You may have them blocked and they’re going to run to the ball. I thought we were consistent and missed a few plays in the passing game that I think could have really helped us. That’s high school football and you’re not going to be spot on every week. We ran the ball early and then late. In between, they stymied our rushing game a little bit. Late in the game, we had used J’Marion (Burnette) and Omare (Latimer) so much that Omare was injured. There at the end of the game, we kept saying it was about first downs and not so much a touchdown. We converted a couple of fourth downs to get the clock down as far as we could.”

He added that Andalusia also emphasized field goals and PAT’s. “It’s funny how the things you emphasize come back to help you win a football game. Cole (Morgan) had two really good kicks. Even at that point, I knew we were putting a lot on him to make that field goal. Had we made it, that would have probably sealed the game, but we knew he could get the ball to the end zone. We felt a little bit better about our protection as far as our field goal unit was concerned. We went with that option instead of punting, and that paid dividends as well.”

Taylor said it was huge to hold UMS to only 14 points.

“We had to come back out after the emotions of thinking we won the game after the pass interference call. We had to make two plays and get stops. Golly, this group is something special and found a way. A month and a half ago, we were not the same team. The way they have really come together and are doing their job now, but we have a tough, tough task with Pike Road.”

This semifinal contest marks the fifth time Andalusia has reached this point in Taylor’s seventh season. It will be a rematch in the third-ever meeting with Pike Road.

“While that is a great accomplishment for us, it’s not the end goal. In order to get to the state championship, you have to get to this point. What we have to do is get over the hump and get to the big dance. You also have the distraction of being out of school all week. We are going to challenge our kids to be disciplined and be unselfish,” Taylor said.

Pike Road holds a 2-0 lead in the short series, which began in 2020. Andalusia hosted the inaugural game last season as the Patriots earned a 39-18 win. The Bulldogs held a 7-point lead at halftime in Week 4 this season but fell to their region counterpart 28-14 on the road.

“We had stolen a possession or two. We faked a punt on them, which eventually led to a touchdown. I don’t foresee us being able to get that on them again. They will be certainly prepared, and it was the first time they had been down all year long. They came out in the second half and just outplayed and outcoached us.”

Pike Road has more Division I prospects on this year’s team than Andalusia in the last seven years combined, according to Taylor.

“They’re so talented, really good, and well-coached. You put that with what they do offensively, and it’s very tough to defend. We have our work cut out for us. I think the biggest thing is while last Friday night’s win (against UMS) was a big one we’re excited about, that was not the end goal. We didn’t start the season saying we want to beat UMS unless it was the one to propel us to the state championship.”

This game will be the tenth semifinal contest in school history for Andalusia with a 4-5 record and 2-2 mark on the road. Pike Road, which restarted its football program in 2018, has never played in this round.

The winner of this game will earn a spot in the Super 7 5A State Championship game at Birmingham’s Protective Stadium against either Pleasant Grove or Fairview. “Our goal is to get there, and we have a game in the way. For now, we have to get ready and play Pike Road,” Taylor said.