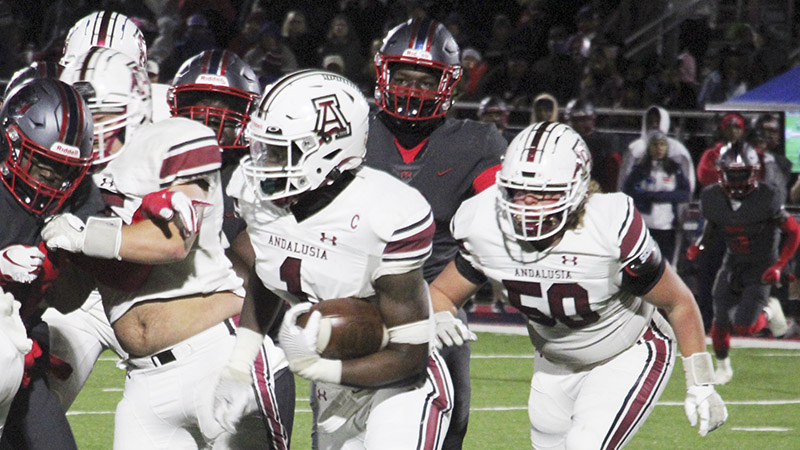 Michael Hourel, Jr. looks for an opening with help from the Andalusia offensive line. Hourel finished the game with 98 yards rushing. (PHOTO BY ROBERT BLANKENSHIP)

Pike Road defended its home turf with a 33-0 win over Andalusia in the 5A semifinals Friday night.

Head Coach Trent Taylor said Pike Road had a great football team and deserved all the credit but was proud of Andalusia.

“Two or three months ago to where we ended up, the truth of the matter is that every team in the state has one goal in mind. We were right there and I’m proud of these seniors. They did a great job leading these guys and set a good example. We have some young ones who are going to get back here. What these kids accomplished was really remarkable, and I’m really proud of them for that.”

Pike Road began at the 28 and got a first down on a 15-yard run by Quinshon Judkins. After a 19-yard run from Judkins, Iverson Hooks converted a third down with a 7-yard run inside the 10. Following a timeout, Michael Hourel, Jr. stopped Hooks on fourth and goal and kept the game scoreless. Andalusia took over and faced a third down, but J’Marion Burnette hit an opening with a 14-yard run for a new set of downs. 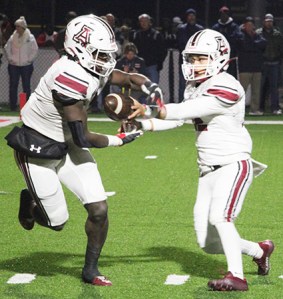 The Patriots kept applying pressure and forced another third down. The Bulldogs kept the drive alive when a horse-collar penalty was called. Burnette ran the next three plays before a punt. PRHS took over at its own 29 as Judkins earned four yards on the ground. Hooks then dropped back to pass and found Judkins open for a 39-yard gain to the AHS 28. Two plays later, Kingston Rogers scampered 10 yards to the 15. Pike Road was turned away inside the red zone once again as Garrett Blackston recovered a fumble. Burnette then rumbled 25 yards for an Andalusia first down.

The game was scoreless after one, and AHS was forced to punt early in the second. PRHS took over and broke through first on an 11-play, 55-yard drive. Judkins had 16 yards on three carries to the AHS 39 before consecutive 7-yard dashes from Rogers. Facing a second and 19, Hooks got just that to move the chains for another Pike Road first down. Judkins capped the drive of just over four minutes with a 1-yard touchdown run. The PAT was no good leaving the score 6-0 with 7:01 left until halftime. Andalusia took over at the 20 after a touchback. 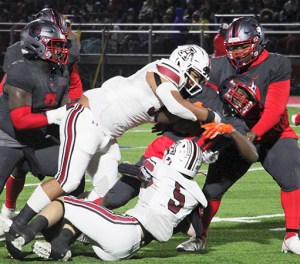 The Bulldog defense teams up for a big tackle on a Patriots defender.

Burnette picked up two yards on the first play from scrimmage before Ayden Amis hit Lucas Jordan for a 6-yard strike. The Patriots’ defense forced a three and out and blocked a punt. PRHS needed just two plays to strike again as Judkins had a 23-yard touchdown run. Landon Holley added the PAT for a 13-0 lead with 4:07 until halftime. The Bulldogs were unable to find an offensive rhythm and punted back around midfield.

Following a 14-yard run by Judkins, Rogers took the second play 37 yards to pay dirt and pushed the lead to 20-0. Joseph Turner returned the ensuing kickoff 21 yards to the 25. Burnette moved the chains with a 29-yard run on third down. Pike Road made another big stop on defense with an interception as the first half ended. Andalusia came out of the break with some hard-fought runs. Hourel found an opening down the sideline for a 48-yard scamper to the PRHS 21. AHS was held in check as the defense delivered a turnover on downs.

The momentum carried over to the offense as Judkins had 5 yards to start the next drive. Hooks then hit Jax Carlton on a 15-yard pass and first down. Two plays later, Rogers hit green grass and raced 68 yards to the end zone. The PAT was good as the Patriots extended their lead to 27-0 with 5:50 in the third. The Bulldogs took over and got a 15-yard first down run from Hourel. Once again, the defense executed another interception.

Pike Road needed only four plays as Rogers scored a 7-yard run with 1:43 in the third. The PAT was no good, as the score remained 33-0. Hourel tallied 20 yards on the first two plays to move the chains before the third quarter ended. Omare Latimer picked up a first down on the initial play of the fourth with a 3-yard run. Amis had a towering punt for Andalusia to the 13. The Patriots kept the ball on the ground with runs from Judkins and Rogers. After forcing the first opposing punt, the Bulldogs regained possession with just over four minutes left and finished the game with six straight carries. 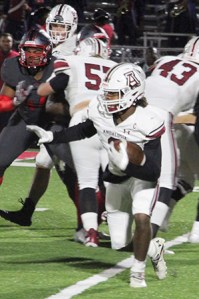 Omare Latimer looks for an opening on a rushing play in the Bulldogs’ 5A semifinal game at Pike Road.

Andalusia (9-5) finished with 202 total yards (190 on the ground) while Pike Road (13-0) had 441. Hourel led the rushing attack with 12 carries for 98 yards, while Burnette finished with 81 yards on 15 carries. Blackston had 7.5 tackles to pace the Bulldogs on defense as Turner and Hourel each earned 7.