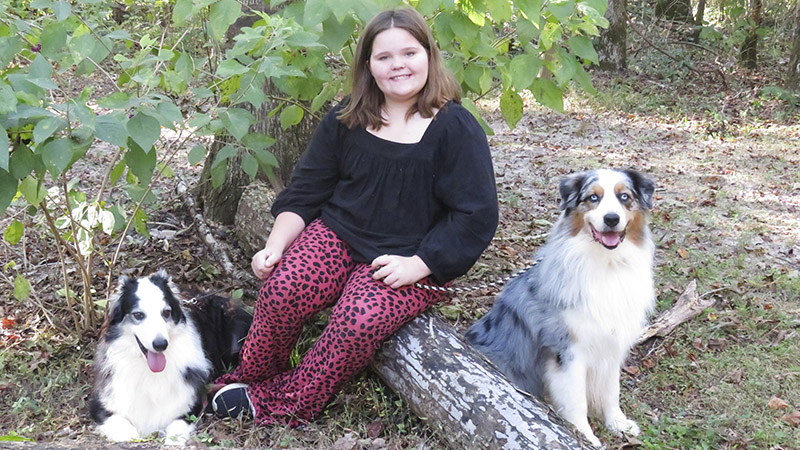 Raley Beth Maddox earned the Level 1 Degree of Excellence from the Australian Shepherd Club of America for competing in dog shows in Florida and Georgia. She competes in conformation shows and is training to compete in agility trials. Maddox attends Red Level School and has two Australian Shepherds, Navy and Swagger.

“We are very proud of Raley. In her first year with very limited showing, she achieved the Junior Merit Award as well as the Level 1 Degree of Excellence,” her mother Darshana Maddox said.

Darshana added that when they are not in the conformation ring, her daughter has a special bond with both of her dogs. “Raley enjoys snuggling and playing with Navy. At night, Raley can be heard giggling and laughing, and Navy is grunting and moaning while they are supposed to be sleeping. Navy joined our family in February this year and it is like he has always been a member of the family. The bond between them is unmistakable.”

Maddox has had Swagger since she was a year old and they have been in the ring together since the age of 2. “They are partners in crime. Raley had a pacifier in her mouth when she first showed Swagger. Through the ups and downs in Raley’s short life, Swagger has always been a loving stabilizer. Raley gravitates to Swagger when things get hectic or stressful,” Darshana said.

Maddox is also the top 3 junior in the 8-12 novice in the nation.

“Through the conformation ring and the dog show world, Raley has gained much-needed confidence in herself. We would like to thank everyone who has shown confidence in Raley by allowing them to show their dogs,” Darshana said.