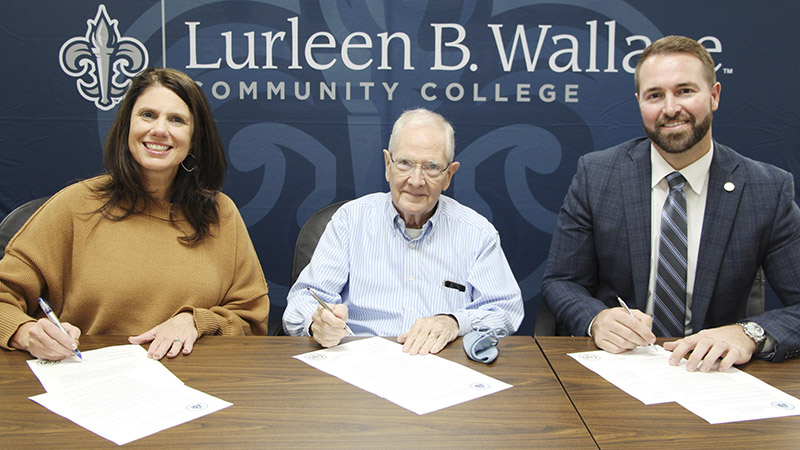 An official signing was held at LBW Community College to announce the endowment of the Merrill Family Memorial Fund.

The Merrill Family Memorial Fund was established in 1986 with the original contribution from Clara Thagard in memory of her father, Eli Reid Merrill. Annual contributions were made until 1991. One of Clara’s brothers was Reid Merrill, the father of Tobey, Scotty, Lee, and William. Scotty and Lulu were friends of Dr. Bill and Betty Albritton who endowed the fund in 2021 in memory of Scotty, Clara, and her daughter Lynne Thagard Zorn, and to honor Scotty’s wife Louise Richardson, nee Waller, (LuLu), and his brother Augustus Lee Merrill.

“It’s an honor for me to remember a very dear childhood friend of mine and the family,” said Albritton. “After Scotty’s passing, I wanted to do something to remember him. To make it a fund for the Merrill Family allows me to do more than just honor Scotty, Lulu, and Lee and hopefully others in the family as well.”

The Merrill Family Memorial Fund is at this moment established to promote the education of a deserving student attending Lurleen B. Wallace Community College.

Tax-deductible contributions can be made to the Merrill Family Memorial Fund by sending a check to LBWCC Foundation, P.O. Box 1311, Andalusia, AL 36420 or contacting cduffy@lbwcc.edu.