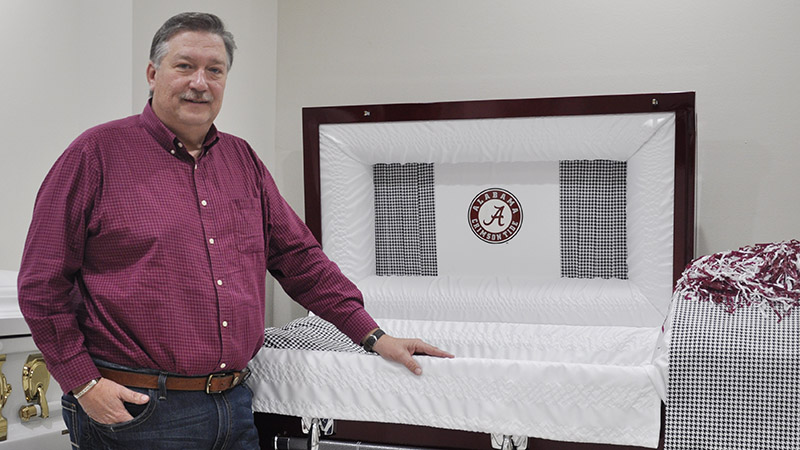 Covington Casket Company has been a staple of Andalusia since 1925. Owner Alan Williamson displays an Alabama Crimson Tide casket in the facility’s new showroom.

Covington Casket Company closed its downtown location after 96 years but began a new chapter with the opening of its expanded facility this summer.

The final day of production in the existing building was June 30. The new location opened its doors on July 12. “We always shut down for the week of the Fourth, so we used that time to move into our new facility,” Covington Casket Owner Alan Williamson said.

According to Williamson, everything has been progressing nicely. “For the first couple of months, we had to work out a lot of kinks. We installed several pieces of new equipment, and there was a little bit of a learning curve to get that up and going correctly and efficiently.”

Williamson said the move into their new facility could not have come at a more critical time.

Covington-made caskets are available to funeral directors all across the South. The new location will bring some modern additions to the staff’s current line of work.

“I’ve been working on something new for our current casket line called a storyboard. Funeral directors will be able to download photos that families bring with them to make arrangements. We will be able to incorporate those photos into a design that will be installed into the lid of the casket. For example, if a family member has a photo of his or her dad on his tractor, we could make a digital print that would be installed in the casket. We’ve test marked this concept, and it has been well-received,” he said. “We plan on launching this nationwide after the first of the year.”

Williamson added that production has increased significantly since the move. “At our old location, we manufactured about 30 caskets a day. We have been able to increase that to about 50 a day and have done up to 70 in one day. Our production area is now double the size it once was.”

Covington Casket will be hosting two open houses in December. “One will be for our funeral home customers, and the other will be for members of the Andalusia Area Chamber of Commerce. The open house will allow them to tour our plant and our new showroom,” he said.

Williamson said the main thing he wanted to accomplish with the new facility was improving quality.

“We were landlocked at our old location, and it served us well for almost 100 years. The buildings were old, and our equipment was outdated. The move has given us a ton of new space, but it’s amazing how quickly we’re filling it up. We have added a showroom and did not have one at our old location. The showroom will be used to showcase some of our most popular caskets. It will allow funeral professionals to see firsthand what our product is all about. I’ve already had one funeral professional come and visit and wanted the exact layout of what we have designed for his new funeral home.”

Covington Casket Company is located at 400 Progress Drive and is open from 7 a.m. to 5 p.m. Monday through Friday. For more information contact your family’s funeral director.

“Moving into our new location has given us a breath of fresh air. My employees are buying into what I want to do here. From the landscaping to our employee break room, when they step on this campus, they know I’m serious about being the best in the business,” Williamson said.