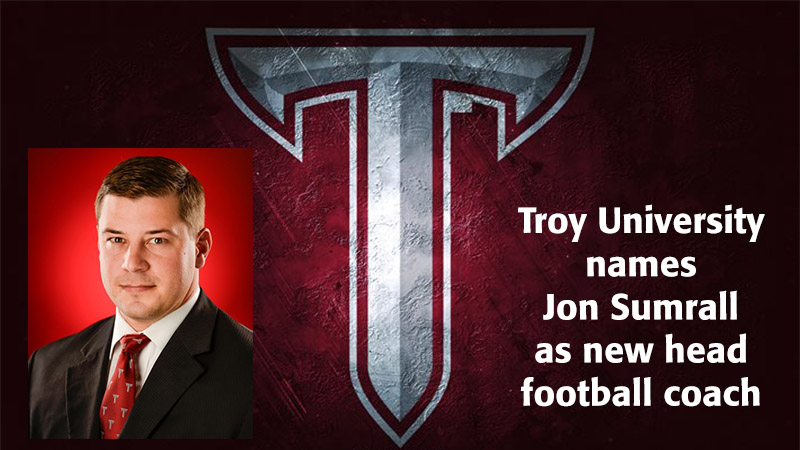 Sumrall comes to Troy from the University of Kentucky, where he recently was promoted to co-defensive coordinator. He previously served as an assistant head coach at Troy under Neal Brown during the 2015-2017 seasons. During that time, he helped the Trojans win a Sun Belt Conference title in 2017, as well as a stunning victory against LSU. He also has coached in the NFL.

Mayor Johnson, who serves on Troy University’s Board of Trustees, also was on the selection committee to name a new coach this week.

“There were four of us on the committee who made the recommendation to the chancellor,” Johnson said. “We interviewed four coaches from around the country and had in-depth interviews with each one. We asked what they thought of Troy and what they knew about Troy.

“One thing was clear,” the mayor said. “Troy is a known football power in the Southeast and the Midwest. We have a highly-respected program.”

“He’s been to Troy. He spent some time in Troy. He knows Troy,” he said. “Troy is a different place than other university cities. Troy is a small, rural town in South Alabama. You have to be different in how you recruit to that. Coach Sumrall understands that, and will be an asset not only to Troy University as a football coach but also to the community.”

“I think we’ve got one of the top coaching prospects in the nation in Troy now,” Johnson said. “He’s a bright young man. He is very, very committed. Very focused. And he is like Nick Saban in that his intensity. His background and his history confirm he can also coach. I’m very excited about Troy’s future.”

The Huntsville native was a two-time all-state performer and a four-year letter winner at Grissom High School.

He is married to the former Ginny Nixon, also of Huntsville, and the couple has four children, Sam, Sadie, Stella, and Selah.

Sumrall will be officially introduced at a press conference on Monday, Dec. 6.