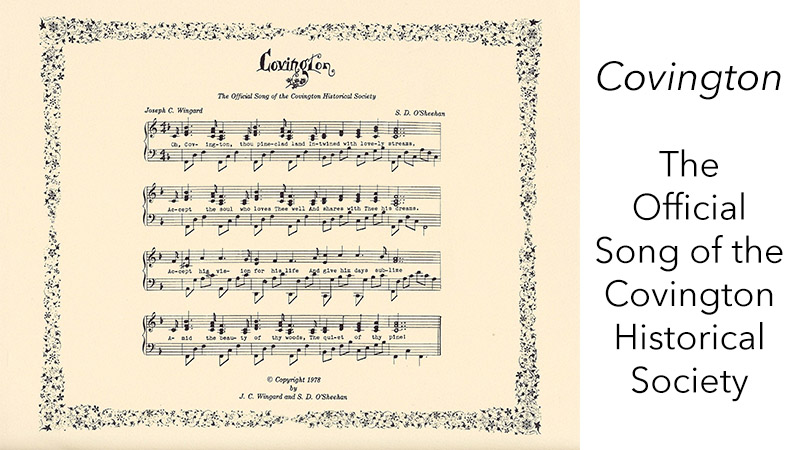 A song for Covington County was penned by J.C. Wingard and S.D. O’Sheehan in 1978.

A 200th anniversary of Covington County is upon us. On December 7, 1821, Henry County was divided forming Covington and Pike Counties. There is a history in the place we call home so I will try to briefly summarize it for you readers. Thanks to historian Wyley Ward, there is a detailed early history of the area in his 1991 book that now includes Covington and the neighboring counties in south Alabama.

Never before has any historian written about this county with more research than Ward. He grew up here, went off to college at Auburn, landed as an engineer in Huntsville with the space program, then retired and came back home to pursue his passion of writing about local history.

Indians occupied the land that is now Covington County when the Europeans first explored the area in 1540. These Indians were members of one of the major tribes of the Muscogee Nation known as the Lower Creeks, so named because they constructed their villages near the streams in the southern parts of Alabama and Georgia. There are no indications that any large Indian village ever existed in Covington County but there were small villages throughout the area and a number of major Indian trails crossed the county according to Ward.

The late McDonald Brooms, who grew up in Andalusia and worked as an archaeologist at Troy University, stated at a historical meeting a few years back that there were more Indian settlements along Covington’s many miles of rivers, streams, and creeks than was once thought by the University of Alabama archaeologists. This was based on digs conducted by TSU.

England, France, and Spain claimed land in south Alabama at various times. The first homes of white men in Alabama were built on the west side of Mobile Bay around 1702. A number of forts were built inland from Mobile including Fort Toulouse which the French built as a defense against the Indians in 1714. The many French, Spanish, and English came into the area in south Alabama and began trading with the Indians. A number of these traders married and lived among the Indians. Some of their descendants later became leaders of the Indian tribes including William Weatherford, Peter McQueen, and David French.

When the United States obtained an agreement with the Creek Indians in 1805 to cut a road from Columbus, Georgia across their land, a road which became known as the Federal Road, early settlers from North and South Carolinas, Georgia, and Virginia travelled down this road into south Alabama. This road probably had more influence on the early development of south Alabama than any other single factor. Early military forts and the earliest settlements in south Alabama were located along its path.

During the War of 1812, the English and the Spanish had engaged Tecumseh, the Shawnee chief, to incite the Creek Indians to fight the white settlers in south Alabama. This brought about the Indian War with a major battle being fought near Burnt Corn Creek in July 1813. A month later, a stockade on the Alabama River, Fort Mims, was attacked by Indians and about 500 inhabitants including women and children were killed.

An uproar from the white settlers calling for retaliation brought General Andrew Jackson and his army from Tennessee who proceeded to destroy the great Creek Indian Confederacy that had controlled and occupied the land in south Alabama for hundreds of years. After the defeat of the Indians at the Battle of Horseshoe Bend, the Creeks surrendered much land in the Mississippi Territory opening all the land in the present Covington and surrounding counties to the white settlers.

The defeated Indians, Creeks and Seminoles, however, retreated to Florida and continued to occupy land in the present counties of Covington, Coffee, Dale, and Geneva until 1819 when Spain sold Florida to the United States.

A Constitutional Convention opened at Huntsville in July 1819 and its work was completed in August. On December 14, 1819, President Monroe approved the resolution of Congress admitting Alabama as the 22nd state in the Union. This was after an election had been held to choose members of the General Assembly, a governor, and representatives to Congress. William Wyatt Bibb was inaugurated the first governor of the new state.

Remember, Alabama celebrated its “bicentennial” two years ago in 2019.

It is not known for certain what process or by whom the name of Covington was selected but John W. Devereux and other representatives from Conecuh, Henry, and Butler counties were active in the formation of the county. More than likely, it is assumed, they had some input into the name selection. Many historians consider Devereux to have earned the title as the “Father of Covington County.” His service and contributions are well-documented as the county’s first state senator who sponsored the enabling acts that created the county. He is commemorated by the naming of the hill where he resided, “Devereux Hill.”

The first election in the various districts of Covington County was supervised by the sheriff as specified in the 1822 Organizing Act. The election was held on April 26, 1823. Justices of the Peace and Constables in each beat were elected. It was not until the following year in 1824 before the county militia was organized.

After the construction of the (log) courthouse was completed, the State Legislature had to pass several acts to authorize county commissioners to levy an extra tax for the building of the courthouse and to order the commission to turn over all the records, documents, and money in their possession to the Judge of the County Court.

Boundary changes have been made since 1821 reducing the county’s area to 1,034 square miles. Covington now ranks as the sixth largest county in the State of Alabama. Maps showing the major changes in the boundaries of Covington County from 1821 through 1871 can be seen in Wyley Ward’s book.

The original site of the county seat of Covington at Montezuma was selected in 1822 by the commissioners appointed by the state legislature. The first courthouse and jail were constructed in 1823 at Montezuma located on the eastern side of the Conecuh River adjacent to the falls in the river.

The late Sidney Waits, local historian, wrote in his book, From the Halls of Montezuma, “No other geographical feature has been so dominant in determining our destiny as has the Conecuh River and the falls near the present day River Falls.”

In 1823 Captain Daniel E. Burch stationed near Pensacola was ordered to open a route into the interior of Alabama, a “trail” to link the United States with its newly acquired territory. It would serve many purposes, as a military road and postal road from Washington to New Orleans. It also would provide a route for settlers moving from Georgia into the interior of Alabama.

In 1824, the work began with Captain Burch, a lieutenant, a sergeant, two corporals, 24 enlisted men, three mules and three wagons. To mark the trail through a vast primeval forest of trees of enormous size, the soldiers cut three large horizontal gashes in the trees of intervals of some 200 yards. The gashes were a least three feet long, a foot high, and a foot deep. All a traveler had to do was follow the three “notches” or “chops” as they were called. Eventually a path would be worn and wagon ruts would appear on the nineteenth century version of a road known as the Pensacola Military Road or the Three Notch Trail.

The trail from Florida followed a path to the vicinity of the Carolina Community entering Andalusia on South Three Notch Street before quickly turning onto Snowden Drive then onto Fletcher Road moving east on County Roads 70 and 43 past Rose Hill and on over to Troy and up to Bullock and Macon Counties where it intersected with the Federal Road.

This information was obtained from the late Lee Harris, TSU History professor. He concluded his story with this statement, “The original purpose of the trail has passed into history. It is a myth that Andrew Jackson was involved with the building of the Three Notch Trail. In the summer of 1824, Jackson was a U. S. Senator from Tennessee and was preparing to run for president of the United States.”

In the year 1841, a flood in the lowlands of the Montezuma trading post community that became known as the “Harrison Freshet” was a catastrophic event bringing yellow fever and malaria as well as the devastation of buildings and homes forcing the settlers to flee to higher ground. The little village slowly relocated on the highest point up the hill between the Conecuh and Yellow Rivers, a place of safety on the watershed.

By July 18, 1844, the new county seat (site) had changed to Andalusia evidenced by the establishment of the post office. This was after a five-year effort led by Rep. Josiah Jones. The land, a forty-acre tract, was purchased from the Federal Land Office at Sparta by Austin J. Robertson and Samuel Pettibone for $1.25 per acre. The title was conveyed to Covington County and the erection of a new courthouse was begun.

Following the Spanish theme, Andalusia was laid out, surveyed, and designed in a square around a plaza, the present court square. It is believed that the Spanish influence may have been responsible for the selection of the name of the new county seat. Perhaps, traders from Montezuma who traveled regularly down the Conecuh River to Pensacola where there most likely was discussion at some tavern of what the name for the new village should be called. (Andalucia is a province in Spain.) Could that have been suggested? We can only guess because thus far there is nothing to substantiate the origin of the name.

This account ends now with the year 1844. Whether truth or myth, these stories all point to the mix of Indian and Spanish influence attributed to the beginnings of Covington County that we now refer to as “the heart of South Alabama.”