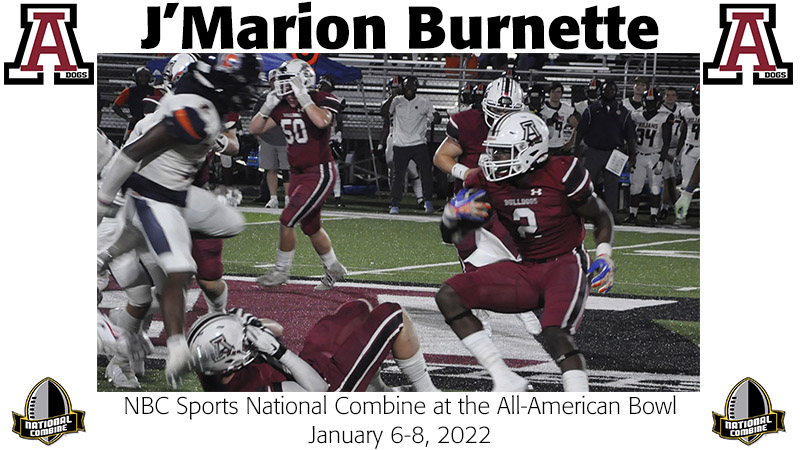 Andalusia sophomore running back J'Marion Burnette's memorable season for the Bulldogs in 2021 led him to an opportunity of competing in the National Combine in January.

Andalusia High School running back J’Marion Burnette received an invitation from NBC Sports to the 2022 National Combine at the All-American Bowl. The event will take place from Thursday, Jan. 6 to Saturday, Jan. 8 at the Alamodome in San Antonio, Texas.

“This recognition means a lot to me. It would not be possible without my family, friends, team, and the whole coaching staff at Andalusia High School. The team and I have worked hard all year, and those guys pushed me every step of the way to be the best that I can be,” Burnette said.

He hopes to go to the event and have fun while representing the Andalusia football program as well as the school. “I was extremely fired up to receive the invitation, but my hype woman and men, Roshell Burnette, Coach (Matt) Mellown, Coach (Ray) Bozeman, and Coach (Tyler) Dent, were more fired up than me. I believe this is a great opportunity to put myself out there not only for me but also my school,” he said.

Burnette finished the 2021 season with 27 carries for 2,070 rushing yards and 25 touchdowns, an average of 147.9 yards per game. He eclipsed the 200-yard mark in three games and achieved a season-high of 217 yards in Andalusia’s home game against Crestview. He also added 12 receptions for 100 yards, a pass for 7 yards, and 4 kickoff returns for 77 yards.

Burnette is a sophomore at AHS. He is the son of Roshell Burnette and the late Edrick Montgomery.