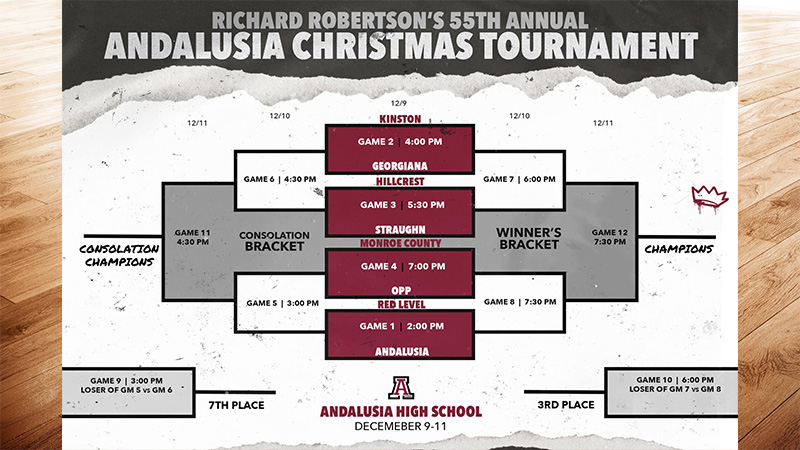 Richard Robertson's 55th Annual Andalusia Christmas Tournament will have an eight-team field and be held Thursday, Dec. 9 through Saturday, Dec. 11.

The longest-running basketball tournament in the state of Alabama is back and scheduled to take place Thursday, Dec. 9 through Saturday, Dec. 11.

Andalusia High School will be the site for Richard Robertson’s 55th Annual Andalusia Christmas Tournament, in which eight teams will play in a double-elimination format.

Local county teams Andalusia, Opp, Red Level, and Straughn comprise half of the field and are joined by Georgiana, Hillcrest-Evergreen, Kinston, and Monroe County.

“Come check out this loaded field of talented teams participating in this prestigious tournament. Named after the legendary Coach Richard Robertson, the Andalusia Christmas Tournament is sure to be a must-see event,” AHS Head Coach Marcus Mickles said.

The tournament opens Thursday with four opening-round games. Andalusia will face Red Level at 2 p.m. followed by Georgiana and Kinston at 4 p.m. Straughn squares off with Hillcrest-Evergreen at 5:30 p.m., and Opp closes out the day with Monroe County at 7 p.m.

The four losing teams on day one shift to the consolation bracket and meet each other at 3 and 4:30 p.m. on Friday. Winners advance to the semifinals at 6 and 7:30 p.m. on day two. The tournament concludes with games to determine each team’s final placement Saturday. The 7th place game is scheduled for 3 p.m. while the consolation bracket wraps up 5th place at 4:30 p.m. The 3rd place contest is scheduled for a 6 p.m. start with the championship game commencing at 7:30 p.m.

Admission has been set for $6 per day, and tickets will be sold at the door.

“We are looking forward to hosting the event as we have for many years,” Mickles said.