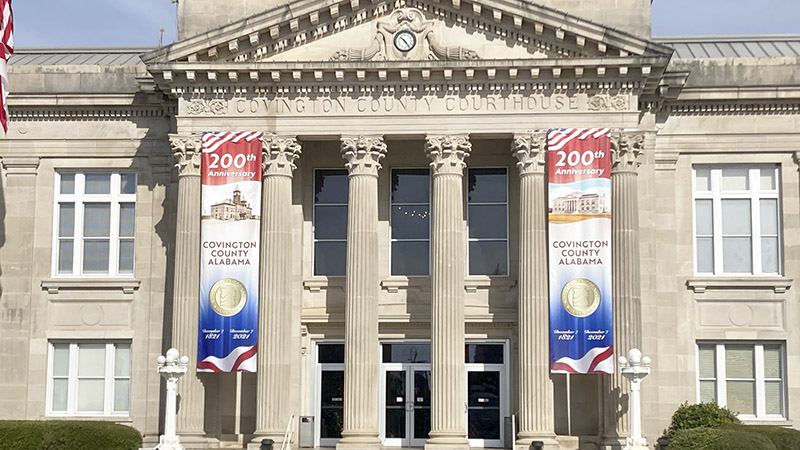 Covington County is celebrating the bicentennial of its founding in the month of December.

Tomorrow is not just another Tuesday as Covington County celebrates 200 years in the making.

“The opportunity now – 200 years later – to commemorate this milestone creates a special time for us to look back and recognize the unique heritage we share and to note the interesting events in our history. It also reminds us to continue our work to provide a future filled with an enhanced opportunity for all of our citizens,” Covington County Commission Chairman Greg White said.

The Covington Historical Society will host an Open House on the county’s birthday, Tuesday, Dec. 7, from 9 a.m. to 2 p.m.

“I appreciate the Covington Historical Society for sharing many of our county’s historical documents and artifacts in the Three Notch Museum. We encourage everyone to stop by for this special event. The museum is a great asset that is available to us throughout the year, and it represents untold hours of volunteer work by the Society over the past decades,” White added.

The State of Alabama was admitted to the Union in 1819. Covington County was created by an act of the Alabama Legislature that was approved on Dec. 7, 1821. It was created from Henry County. This new county was named in honor of Brigadier General Leonard Wailes Covington from Maryland after he was killed in the War of 1812. At that time, Covington embraced several other counties, but through the years, it has been reduced to its present size by the carving out of Dale and Geneva counties.

White settlers came from Georgia on ox wagons to what is now Covington County in 1816. An early settlement was near Green Bay. Another settlement was near Rose Hill, settled by the people from North and South Carolina. The earliest church was established near Rose Hill in 1823 and was called the Macedonia Church. The earliest settlement was on the Conecuh River, four miles west of what is now Andalusia. This community was the first county seat and a post office called Montezuma was established in 1829. There was river traffic from Pensacola to Montezuma in those days.

Immigrants flocked in from Georgia and the Carolinas after a Federal Law of 1836 had ordered the Indians to be moved west of the Mississippi. The first land sold by the government in this county was near the present community of Heath and sold through the Sparta Land Office in Conecuh County. Later, this land office was moved to Elba.

In 1841, the lowlands around Montezuma were flooded. A yellow fever epidemic occurred and brought much disaster and disease to the lowlands. The settlers were forced to flee to higher grounds. They selected the highest point in the vicinity, a place of safety on the watershed that today is the City Square of Andalusia. This was called “New Site” until 1846 when a post office was established and the town designated as Andalusia. No one knows where the name Andalusia originated; however, legend has it Spanish explorers, Ponce de Leon and Desoto, and their men were the first white men in this area. It is felt that they were responsible for the Spanish influence. It is assumed that since Spain has an Andalusia Province, that this city was so named because of this influence.

In 1868, a bill was passed in the Legislature of Alabama to change the name of Covington to Jones County. State Representative Edward Mancil’s purpose was to please the Judge of Probate, Josiah Jones. Communication was not good in those days and the first that Jones knew about it was when he met Mancil on the street after his return home. Upon hearing that the Covington name had been changed, Jones was so angry that he threatened Mancil unless the name was changed back to Covington. Mancil then had the county name changed back to Covington. Thus, Covington was Jones County for only four months in 1869.

The county remained relatively isolated until the Louisville and Nashville Railroad completes lines across the county. As a result, several towns were created, including Opp, Red Level, Onycha, Gantt, and Florala. At the turn of the century, the county’s vast acres of pine forests led to a boom in the timber and turpentine industries.

Encompassing approximately 1,038 square miles, Covington County lies wholly within the East Gulf Coastal Plain physiographic section. It is bounded to the north by Butler and Crenshaw counties, to the east by Coffee and Geneva counties, to the south by Okaloosa and Walton counties in Florida, and to the west by Escambia and Conecuh counties.

In addition, Gantt Lake, created in the 1920s, impounds the Conecuh River. The Blackwater, Yellow, and Pea Rivers also feed into the county via the Five Runs, Clear, Dry, Panther, and Corner creeks. U.S. Highway 84 runs east to west through the center of the county. U.S. Highway 29 and U.S. Highway 331 run north to south in the eastern and western sections of the state, respectively.