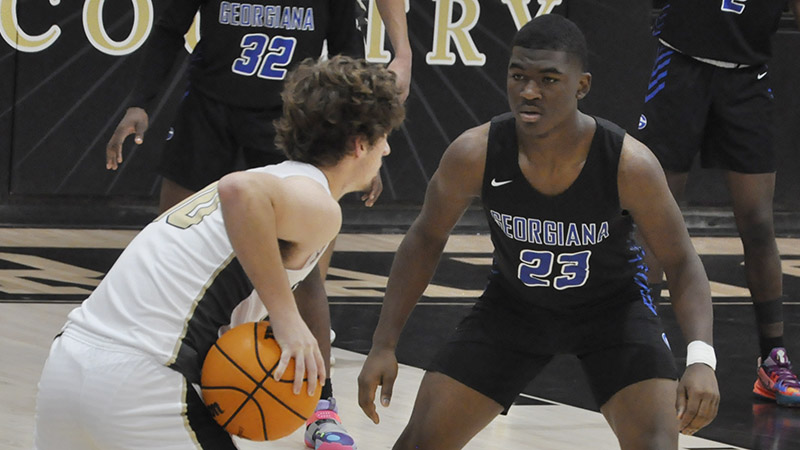 Straughn's Jared Hawkins, left, goes eye to eye with Georgiana's Marques Payton during an offensive play for the Tigers. (PHOTO BY ZACK MAIO)

Following a full week on the road, Straughn finally got the opportunity on a new home court against Georgiana Monday night.

The Lady Panthers (4-2) used a strong showing on both sides of the ball for a 39-22 win over the Lady Tigers (1-9). Points were hard to come by in the opening period as the score stood at 5-2. GHS took an 18-8 lead at halftime and padded its lead to 35-12 with eight minutes to go. SHS fought back in the final quarter with 11 points, but it was not enough to overcome the final deficit. Melonie Harris led Straughn with nine points as Anna Driver added four. Zykeria McClain paced Georgiana with 11 points, while Lillie Boggan also had a good showing with nine.

Turnovers and missed shots plagued the Tigers (3-2) in the finale as the Panthers (5-1) grabbed a 60-41 win. Both sides came out strong as GHS led 13-10 at the end of one. Riley Brooks hit a three at the buzzer as SHS drew within 26-20 at the break. The opposition took advantage of several mistakes and built a 44-26 lead going to the fourth. The two teams combined for 31 points in the final quarter. Micah Turner had 13 points to lead Straughn as Brooks came through with 12. Daniel Bell collected eight, and Abram Guilford rounded out the effort with six. Tremari Nash knocked down five threes and paced Georgiana with 17 points. Zack Boggan and Amari Feagin also earned double digits with 12 and 10, respectively.

SHS won the B-team game 34-33 after a GHS shot fell short at the buzzer.

In action from Friday, Dec. 3, the Lady Tigers came up short to Pleasant Home 29-26 before the Tigers earned a hard-fought 32-25 win over the Eagles.

Straughn returns to the court Tuesday, Dec. 7 with a rivalry showdown at Andalusia.