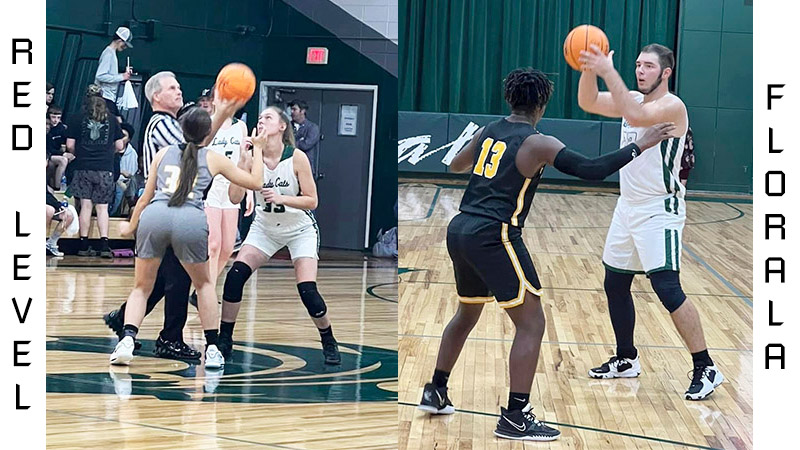 Both Red Level varsity teams were unbeaten on the season, but only one remained when the night ended in Florala.

It was a hard-fought battle as the Lady Wildcats (6-2) handed the Lady Tigers (6-1) their first loss of the season 57-44. Florala took a 9-6 lead after one and increased the margin to 21-15 at halftime. Red Level rallied in the third but still trailed 34-26. Each side was stellar in the fourth with a combined 41 points to account for the final margin.

“We came out and played super aggressive and set the tone of the game. Sharae had a great night, and we miss Kyndra Anthony’s presence. Once again, we had some younger girls step up, and they did all we asked them to do. Our kids are continuing to play relentlessly and with a chip on their shoulders. We are getting better night in and night out. We are finding our identity and continuing to overcome adversity,” said FHS Head Coach David Bass.

The Tigers (7-0) continued their unblemished start with a 77-67 win and snapped a three-game winning streak by the Wildcats (4-4) in the nightcap.

Florala came out of the gate and built a 16-10 lead. Red Level answered with a 25-point second quarter and went into the locker room nursing a 35-31 advantage. RLS continued to score at will and swelled its lead to 56-42 after three. The nets remained intact in the fourth despite both teams coming up with huge showings. FHS had a strong finish with 25 points in the final eight minutes, but it was not enough.

“We did not play well in the third quarter and had too many missed free throws and turnovers. Foul trouble was tough also. I was glad to see the effort the team gave to cut it to a two-possession game late, but they couldn’t overcome the mistakes. We will learn from this and make improvements,” said FHS Head Coach Troy Turman.

The Tigers won the B-team game 47-33 over the Wildcats.

Red Level’s boys travel to Andalusia Thursday, Dec. 9 at 2 p.m. The girls are back on the court Tuesday, Dec. 14 with a 5:30 home game against Opp.

“Coach Bass had his girls ready to play. We just didn’t shoot the ball well nor rebound, and their game plan was better. However, that’s my fault and we will correct the mishaps. Our boys played well and maintained our intensity and ball control, which led to our win. I am asking our fans to come out and support our varsity boys against Andalusia,” said RLS Head Coach Bridges Anderson.