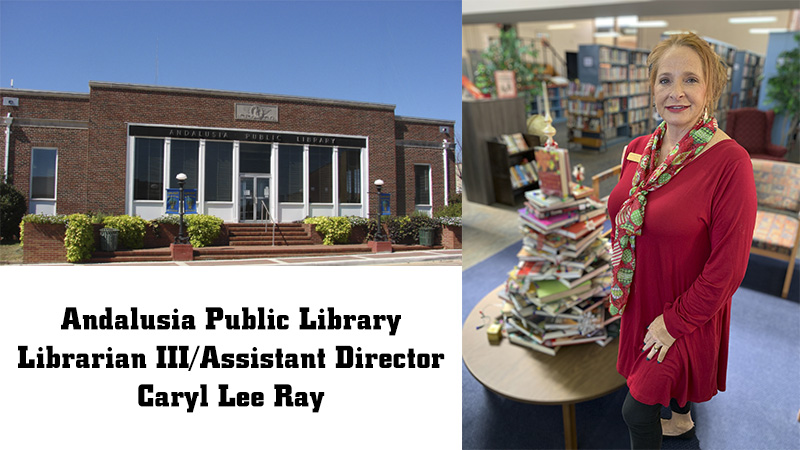 Caryl Lee Ray has been promoted to Andalusia Public Library’s librarian III and assistant director position. Ray will also continue in her current role as the children’s librarian.

Following a promotion to Librarian III, Caryl Lee Ray said it best: the Andalusia Public Library is so much more than books.

APL Director Mona Simon referred to the new position as assistant director. Ray first began working for the library in 2008 when the youngest of her four boys was in kindergarten.

“After dropping the boys off on that first day of school, I drove to the public library. I lamented to a friend on the phone how my guys were growing up. She said we would pray for the perfect opportunity to use my skills. When I entered the library, Director Karin Taylor approached me and said that Betty Harrelson Windham would be retiring soon. She asked if I’d be interested in the Children’s Librarian position. I could hardly wait to call my friend back and share the news,” Ray said.

She added that the library would become her island throughout the years. “Mama brought me as a small child, and I rode my bike for the summer reading programs. LaFerne Griggs would help me research books for assignments. My own children even had library cards while they were still in infant carriers. As a mother, I sat through puppet shows and sung ‘Little Bunny Fufu’ more times than I can count.”

For her, the promotion to librarian III carries more significance than just the title.

“From being a library mother to part-time librarian to children’s librarian, this has been an incredible adventure. Under the instruction of Joan Herring and Mavene Nichols, I learned the patience in locating books given just the color and general subject of a book. Linda Grimes would encourage some of my ideas for ‘bigger and better’ but would also caution me to ‘rein it in’ on other things,” Ray said. “The patrons and coworkers I’ve had the privilege of meeting through the years are now my family.”

As the children’s librarian, Ray said she has been able to use her teaching degree in a number of different ways. “I go into schools to read to classes, lead safety and community helper lessons for daycares, speak to civic organizations about the importance of libraries, and promote reading literacy throughout Andalusia. Using puppets, songs, dances, and general silliness in my storytimes, I can teach little ones the library is much more than books.”

Things in the library world have changed significantly over the past few years.

“My mentors have retired, and some of my friends and coworkers have passed away. I am now the oldest one still here and was encouraged to complete an application as an assistant librarian. The City of Andalusia agreed and has allowed me the privilege of continuing as the children’s librarian and now librarian III. I will be able to work with the director in generating ideas and in day-to-day duties. We are in the process of modernizing our collection with E-books while preserving the integrity of the library,” she said.

According to Ray, the prestige of working for APL and being known as “The Library Lady” is not to be taken lightly. “From the moment someone enters the building and browses the shelves, I want them to feel like they are a part of our family. Amy Mott is able to locate books and items from libraries around the world through interlibrary loans. Gwen Ryland is cataloging incoming books daily. Threasa Martin is greeting patrons and checking out books. Mona Simon is planning and overseeing our progress.”

The Andalusia Public Library is located at 212 South Three Notch Street and is open from 8 a.m. until 5 p.m. Monday through Friday. For more information e-mail library@cityofandalusia.com or call 334-222-6612. “God blessed me with a dream opportunity where I get to tell my stories and be a part of this awesome adventure,” Ray said.