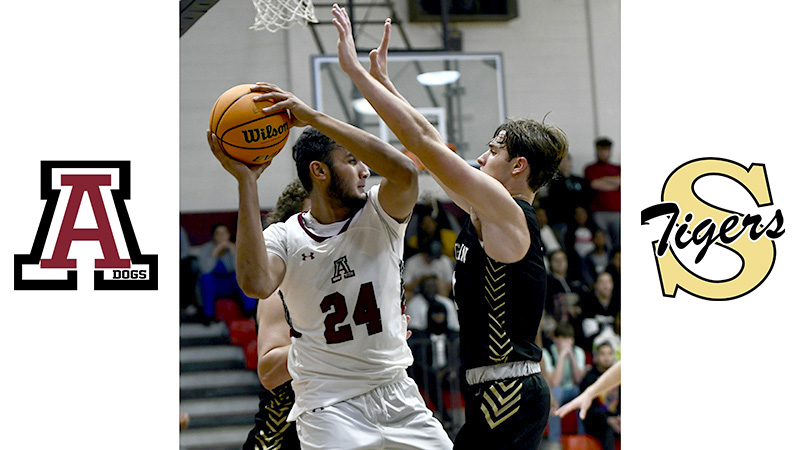 Bragging rights come into play anytime there’s an old-fashioned rivalry, and Tuesday night was no different.

The fourth quarter proved to be the difference-maker as Straughn (4-2) outlasted Andalusia (4-3) 60-49 in the varsity boys’ game. Both sides got off to a great start as the Tigers took a 14-10 lead after one period. The Bulldogs responded to force a 28-28 tie at the halfway point. The script did not change in the third as each team put up 14 to keep the action knotted up at 42-42 with eight minutes left. SHS took control and did not let up, as AHS was unable to make a comeback bid.

“I am so proud of these young men. We had just come off of a tough game yesterday with a very talented Georgiana team Monday night. These Tigers decided to fix the mistakes we made the night before and reward ourselves on the offensive end. These young men know our goal is to continually improve and work on our skills for the area. This was a great win, but at the same time, we have to keep our eyes on the prize. I can’t say how proud I am of these young guys and thank the good Lord for working through them and giving them the energy to play back to back like they did,” SHS Head Coach Trevor Driver said.

Abram Guilford drained four threes and led Straughn with 19 points. Micah Turner also had a great showing with 15 as Riley Brooks and Daniel Bell had 10 each. Eli Guilford made his season debut with a three after missing action due to a broken foot. Tevin Sigers notched 14 to pace Andalusia. Brendan Davison was next with nine as Cammeyun Love added seven.

“Hats off to Straughn for playing really well. We have a lot of work to do and are still learning how to play the style of basketball I would like to play. We didn’t shoot the ball well tonight, and that definitely hurt us. We will get back to work and prepare for Red Level in Richard Robertson’s 55th Annual Christmas Tournament,” AHS Head Coach Marcus Mickles said.

Andalusia (4-1) pulled away from a close game to take the varsity girls’ contest 45-33 over Straughn (1-10). Action was neck and neck early on as the score stood at 9-9 at the end of the first. The Lady Bulldogs responded with a strong second quarter and took a 20-14 lead into the break. The Lady Tigers stayed within striking distance but trailed 29-22 after three. AHS held on down the stretch to take the 12-point win over SHS.

“It was a physical game and that comes with us being neighboring schools. Straughn always creates that type of game, and I thought our girls were resilient. They played hard despite missing three starters. I felt like our girls have matured a lot through the game. My backup players came in and gave contributing roles. We persevered through it, which is something we needed to do,” AHS Head Coach Bennie Shellhouse said.

Abbi Hataway sank a trio of shots beyond the arc and led Straughn with 11 points. Melonie Harris added two threes and finished with eight points, and Ora Hall finished at seven. Zanyia Anderson was the team leader for Andalusia with 16 points including a pair of threes. Taya Newton and Kamari Gay also had double digits at 12 and 10, respectively. Dianna-Grace Nelson tallied four.

SHS Head Coach Bradley Stephens agreed on it being a physical game. “I saw improvement in the girls today. We need to limit our turnovers, and that will help us stay in games better. Overall, the girls played hard and got better tonight,” he said.

Straughn squeaked by Andalusia 34-32 in the B-team game.