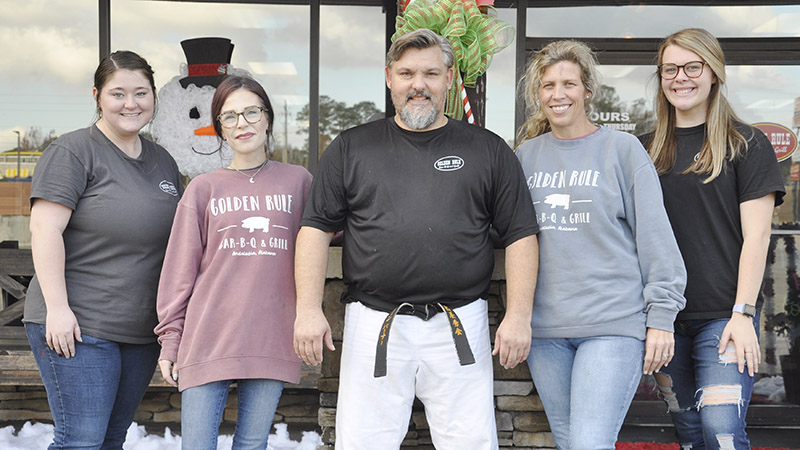 Shann Varner knows a thing or two about karate and wants to help raise awareness for women by teaching a self-defense class with those skills.

The event will be a collaborative effort by Five Runs Farm and Golden Rule BBQ on Thursday, Dec. 16 at 7 p.m. Five Runs will serve as host of the class for ages 12 and up.

Varner, a 25-year third-degree black belt veteran in Yoshukai Karate, realized there was a need for the self-defense class while working part-time at Golden Rule.

“I noticed that as we were leaving late, most of the girls went out the front door of the restaurant. Usually, the doors lock behind them, and it’s between 9:30 and 10:30 at night. As someone who has taken karate for several years, the lack of self-awareness bothered me. They were looking at their phones with their heads held down. They should be aware of their surroundings and understand we live in a world that is not as easygoing as it was 20 years ago. I told Christy I would like to hold a self-defense class for the ladies and young women of Golden Rule to offer protection if they need it, and she thought it would be a great idea. Guys are also welcome to come and learn about self-defense,” he said.

Golden Rule Owner Christy Turner added the event would be open to the public with limited space and be conducted on a first-come basis. “This self-defense class will not only be very important for our restaurant staff but also the general public. There is no charge to attend, but donations will be accepted. We appreciate Tabitha Sasser and Abigail Powell for allowing us to use their facility.”

The class will help make women aware of their surroundings, especially during the late evening hours. “The sex trafficking is bad in bigger areas such as Dothan and Montgomery. These kids are looking down texting and not paying attention. They need to understand that somebody can come out of the shadows just as easily and snatch them up. Nine times out of 10, they’re looking down. Although screaming will help call attention to what is going on, it will not resolve the situation. People say it can’t happen to them in a little town like Andalusia, but anything can happen to anybody,” Varner said.

Non-perishable items may be brought to the class as donations. “I’m sure there are food drives taking place during the holidays. If someone wants to bring a can of soup or other canned goods, we will give back to the community and help those who are less fortunate than us.”

Varner works full-time with Carolina Millwork and Truss and teaches classes at the Adult Activity Center behind Andalusia Ballet from 6:30 to 8:30 p.m. Mondays and Wednesdays. He is married to his wife of 22 years, Amanda, with two children: Kaitlynn and Kole. “I teach traditional martial arts for ages five and up. Our style is called yoshukai, and the name of my school is Andalusia Yoshukai Karate.”

Five Runs Farm is located at 17922 County Road 34 outside of Andalusia. For more information visit Andalusia-Yoshukai Karate on Facebook or call Shann Varner at 334-475-1825.

“I’ll be going around helping each person individually and hope even some guys who are smaller in stature show up wanting to learn self-defense,” Varner said.