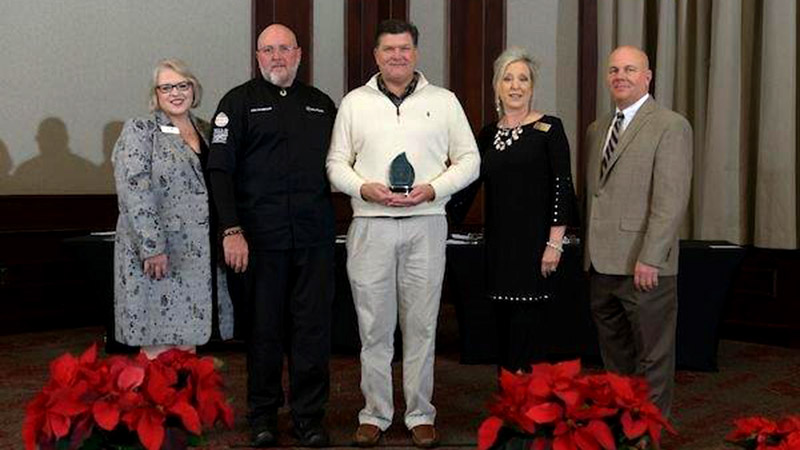 The Wheelhouse was nominated for the award by the Opp Chamber of Commerce.

“When life-long friends Merrill Culverhouse and Jon Gibson opened a downtown restaurant in their south Alabama hometown of Opp they did more than provide another dining option for citizens. Since opening in December 2019, Wheelhouse-Opp and the team of Gibson, Culverhouse, and his wife, Susan, have embraced their hometown. They have created a destination restaurant focusing on ‘coastal comfort cuisine’ while becoming firmly entrenched in the civic fabric of their community. Each week the restaurant welcomes the Rotary Club of Opp. Additionally, they provide fundraising opportunities, special events for the community, and donate countless gift cards and meals. During COVID19, while many longer tenured restaurants and businesses struggled to survive, the Wheelhouse-Opp team were determined to keep their fledgling restaurant afloat and created take out friendly meals that are now featured as ‘Blue Collar Plate’ lunches. Expansion has already come in the form of a food truck that travels throughout Opp and Andalusia with plans to expand further. Hometown pride and the belief that all things are possible runs deep in the team that created this year’s Emerging Small Business of the Year,” stated a press release about the restaurant.

“Alabama’s Small Business of the Year” awards presented annually by the BCA and the CCAA recognize small businesses in employee-number based categories. They are considered to be the state’s very best small businesses based on a variety of civic and professional standards. The Emerging Small Business of the Year award is the fourth award given each year.

This year 45 small businesses were named as finalists for “Alabama’s Small Business of the Year” awards. All of the award finalists were recognized and honored at the CCAA/BCA Partnership Annual Meeting/Luncheon at The Harbert Center in Birmingham.

In 2003, the grassroots efforts of CCAA were strengthened when The Partnership was formed between the BCA and the CCAA. The BCA/CCAA Partnership is the first of its kind in the United States and has become a model for other states. Together, the two groups represent the interests and concerns of over 1 million working Alabamians.

The Business Council of Alabama is Alabama’s foremost voice for business. The BCA is a non-partisan, statewide business association representing the interests and concerns of nearly 1 million working Alabamians through its member companies and its partnership with the Chamber of Commerce Association of Alabama. The BCA is Alabama’s exclusive affiliate to the U.S. Chamber of Commerce and the National Association of Manufacturers.