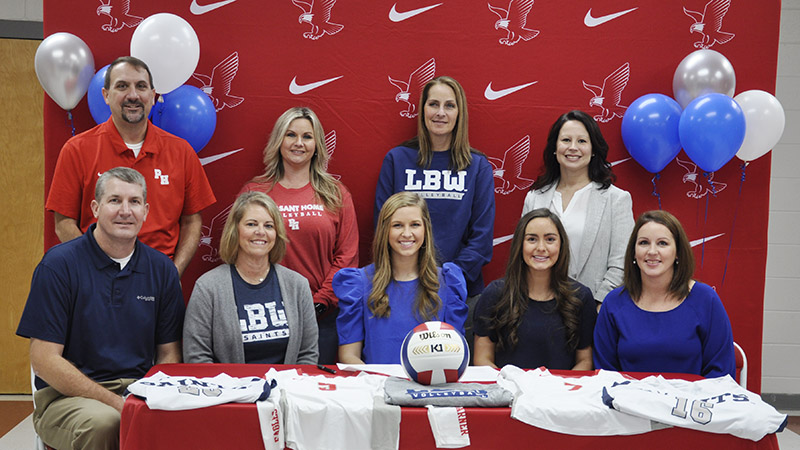 Amy Garner and Lexi Straughan have been best friends since fifth grade, so it’s only fitting the two remain inseparable and start college together.

Garner and Straughan each signed a National Letter of Intent to play volleyball at LBWCC and will join the Saints program next fall.

While at Pleasant Home, Garner first began playing volleyball in the seventh grade, and Straughan joined during her freshman year.

“I enjoyed watching the girls ahead of me play and knew that one day I wanted to. My primary position was outside hitter, but I played all the way around,” Garner said. “I saw the way you have to work as a team. You have to get a good pass to get a good set and a good set to get a good hit. If one person is not feeling it, then the whole team is off, so it takes a lot of encouragement in a team. I played setter,” Straughan added.

Both agreed having the support of their parents and family means everything.

“My mom always makes me feel better after a game if I didn’t do the best. It means a lot to have my family by my side and how they pushed me towards my goal to play at LBW. My mom and dad have always pushed me towards my dream, and I’m extremely thankful for that,” Straughan said.

“I love the support I have from my family. It means so much to me to have them supporting me at every game no matter where we’re playing. They have been my biggest encouragement and always push me to be the very best that I can. It makes me so happy to look in the stands and see both sets of my grandparents at all of my games. It’s a blessing that they are able to come support me,” Garner said.

They have enjoyed their time playing for the PHS Eagles. “Pleasant Home is a great place to be. It’s small so everyone knows everybody, and I had the privilege of getting to play with all of my best friends since kindergarten. We all got along on the court, so the teamwork came naturally,” Straughan said.

Garner was equally grateful for her time at the school. “The volleyball platform is very big here. I made it to the state tournament two out of the three years I was on varsity. I’m so grateful for the opportunity to make it that far with my teams.”

“Each brings something different to the table, Lexi with her passing and setting, Amy with her hitting and blocking. They were great leaders on the floor for us this year and kept things moving during practices even if I had to step away for a moment. I am extremely proud of both of them, and it has been a pleasure to have been their coach and watch them achieve one of their personal goals as they further their education. I think these young ladies are excited and are ready to go to work for Coach Wiggins and take their play to the next level. We are looking forward to watching them play for LBW and hopefully making an impact for the Lady Saints.”

The two learned a lot under the guidance of Wilson. “He has been a great coach throughout the years. He always pushed me to be my best, never settle where I am, and work to get better and improve,” Garner said. Straughan said he taught her selflessness. “I need to put my teammates before myself. He also taught me to always encourage them instead of getting frustrated from mistakes. We all make them and yelling will do nothing good.”

Straughan is looking forward to having the opportunity to be a part of a team that requires a lot of commitment. “The more that I put into it, the more passionate I’ll become about my team and accomplishing things together. I also cannot wait to make new friends on a team full of different people.” Garner added that she has always loved playing volleyball and cannot wait to continue her career at LBW.

Both agreed on why they chose to remain close to home and become members of the LBWCC Saints volleyball team.

“I always wanted to play in college but wanted to be near family and friends. When I got the news that LBW was getting a team, I was so excited. When I was given an offer, I knew that’s exactly where I was supposed to be,” Garner said. “I chose to become a Saint because I have always wanted to continue my volleyball career into college. Choosing LBW was an easy decision,” Straughan added.

LBWCC Head Coach Janie Wiggins said the two are dedicated athletes and students. “When we had our competition day this past summer, Amy and Lexi volunteered their time to come out and help. They don’t realize what their help meant and even though they didn’t play, they were willing to help out in any way. They also showed support by watching several of our matches. To me, it already showed their level of interest and dedication to our program. That’s what you’re looking for as a coach with their character, work ethic, and academic excellence. LBW is honored to have these two young ladies be a part of our program,” she said.

They are equally excited about having Wiggins as their next coach. “I can’t wait to be under the leadership of Coach Wiggins. I have really enjoyed getting to know her and can’t wait to learn from her. I plan to use it for when I later become a coach,” Garner said. Straughan felt her future coach has a lot of knowledge about volleyball. “I’m ready to soak it all up and hope to learn more techniques on being a setter and floor coverage. I’m open to anything she wants to teach me.”

Garner said her biggest volleyball accomplishment came this year when she was nominated for Alabama Player of the Year’s Top 10. Straughan added that hers came during her junior season when the Eagles made it to the state finals and came up short to Donoho.

“I am so thankful that God has blessed me with the ability to play and continue at the next level. I could not have made it this far without Him. I had the opportunity to be the bookkeeper for the 2019 state championship team. I always looked up to the girls on the team and wanted to make it as far as they did. It was such an awesome experience getting to be with the team and see all the hard work they put into winning. I got to watch my sister and her team make history, and I’m thankful I was part of it,” Garner said.

“I would like to thank everyone who has encouraged me throughout my games. I would like to mention my aunt, Amber McKathan, who has been a big part of my sports career and has come to almost every single one of my games throughout high school. I’m so thankful for this opportunity to play at the upper level under Coach Wiggins,” Straughan said.