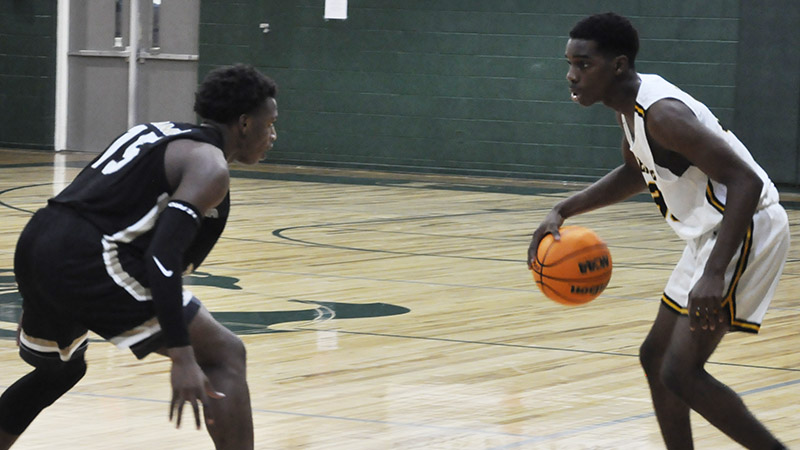 Greenville’s B.J. Richards, left, and Red Level’s Malikye Wright face off during a play in day one action at the Florala Christmas Tournament.

It was almost a mirror image in two varsity contests as Red Level fell short to Greenville at the Florala Christmas Tournament Thursday.

Although the action was close early in the boys’ game, Greenville pulled away in the fourth quarter for a 76-69 win. Javen Poindexter and Caleb Padgett each tallied five points in the first, but Red Level trailed 21-14 after one. Demarcus Johnson led the charge with nine in the second. Poindexter tacked on seven more points as GHS took a 39-32 lead into the break. Malikye Wright collected two baskets and went 3-of-4 from the line in the third. RLS totaled 23 in the period and cut the deficit to 56-55 with eight minutes remaining. Each side traded baskets in the fourth as the lead changed hands on a number of occasions. Johnson and Poindexter combined for Red Level’s 14, but it was not enough to overcome Greenville’s 20.

Johnson led RLS (10-3) with 26 points and was followed by Poindexter who grabbed 20. Padgett notched 10 including a pair of three-pointers while Wright earned nine points. Tyler Mallory paced GHS (3-5) with 23 points.

Much like the first contest, Greenville used a strong finish to take the girls’ game 54-41. Red Level only managed six points out of the gate. Liz Cross, Kaitlyn Beverly, and Ruby Carroll had two apiece as the score stood at 18-6 at the end of the first quarter. Beverly delivered seven points in the second as Cross chipped in six to cut the GHS lead to 30-21 at halftime. Cross continued to shine with seven in the third, while Carroll went a perfect 4-of-4 at the line. RLS held serve on defense and fought back to make the score 39-35 after three. GHS returned the favor in the final period to garner the 13-point win. 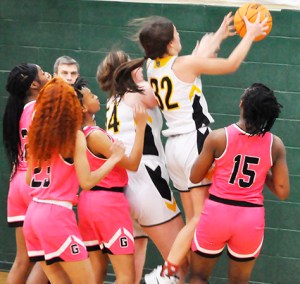 Ruby Carroll powers her way to the basket amidst four Greenville defenders.

Cross paced Red Level (8-2) with 17 points as Beverly and Carroll also finished in double figures with 10 each. Sunita Oliver led Greenville (2-4) with 25 points.

In previous action this week, Red Level fell to Opp 50-43 Monday but rebounded with a 65-62 win Tuesday over Straughn.

“Our teams are playing well at this point. However, we have to continue to work on correcting our turnovers and taking care of the ball. We look forward to playing Paxton and Highland Home today,” Head Coach Bridges Anderson said.