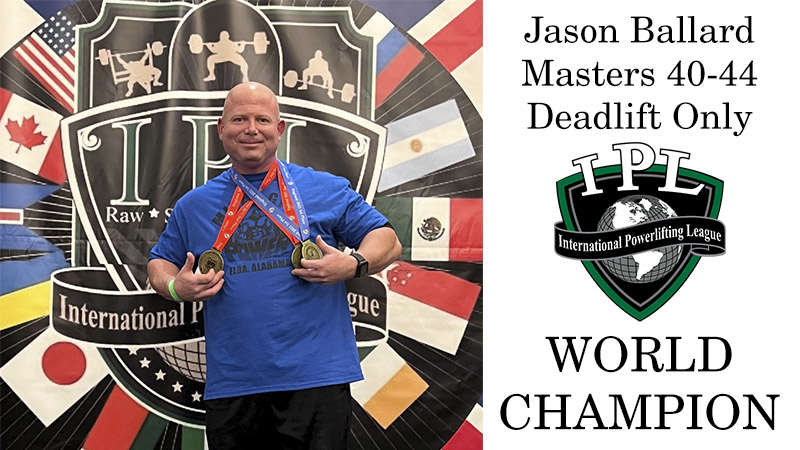 Jason Ballard, a special agent with the Alabama Law Enforcement Agency and a Straughn High School graduate, won the world championship for his age division in the deadlift event in Coventry, England.

He previously won a National Championship with the United States Powerlifting Association (USPA) earlier in the year. Because of his win, he was invited to compete on a worldwide stage in Coventry, England. 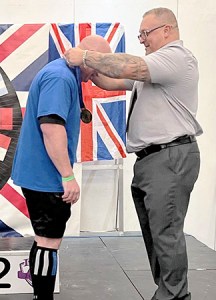 He said his injury before the world competition taught him quite a bit. “It taught me to never quit, to never take anything for granted, and that even if you’re not 100 percent, you still have to give it everything you have no matter what. Who knows, you still might walk away a champion.” 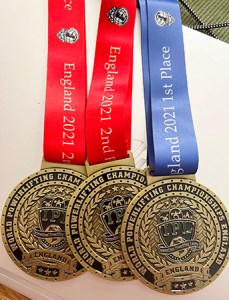 In addition to his World Championship Medal, Ballard also placed second in Masters 40-44 Bench Only and second in Men’s Open Deadlift Only.

Ballard was humbled by all of the encouragement and support he received from his title.

“I first want to thank God for blessing me with the opportunity to compete. All credit goes to my family and friends for believing in me, even when times got tough during training. Without God and the support system of my family and friends, none of this would have been possible,” he said.

He first started powerlifting last year while going to Mike’s Gym in Elba.

“Garrett and Wes Barksdale were training for a powerlifting meet, saw me lifting, and said they wanted to see what I could do in a competition. I started training in October 2020 and had my first meet in February this year at the Bending the Bar meet in Crestview. While I was there, I set all new Alabama state records for my age and weight class in squat, bench, deadlift, and total,” Ballard said.

That meet qualified him for the USPA National Championship in San Antonio the first week of June this year. “I went and competed in Masters 40-44 125 kg Bench Only and Deadlift Only. I placed third in Deadlift Only and won first in Bench Only and lifted enough to qualify for the world championship.” The world competition was only his third ever.

He is the son of Ed and Shirley Ballard and a 1999 graduate of Straughn High School. Ballard has worked for the State of Alabama in law enforcement since 2009.

“What I enjoy the most about powerlifting is that even though you’re competing against all of the other lifters, everyone supports everyone else. They are your competitors as well as your biggest supporters.”

Ballard feels like lifting weights is his stress reliever. “It helps me stay in shape to better serve and protect the citizens of Alabama, but it also helps keep me sane and humble. No matter the day you’re having or no matter what all is going on in your life, the weights are going to be there. As a lifter and as a person in general, we either get better each day or get worse and never stay the same. I strive to get better every day whether it’s lifting more, being a better son, brother, friend, or law enforcement officer,” he said.

Ballard is now back home in Alabama and is looking forward to more competition in the future. He has plans to compete at the USPA Powerlifting National Championship in Las Vegas in July 2022 and then the IPL World Championship in Moscow, Russia in November.

“It’s just not every day that a person from our area has been able to claim the title of National and World Champion,” Ballard said.