DAC Foundation ‘On the Road’ for Moon presentation in Andalusia 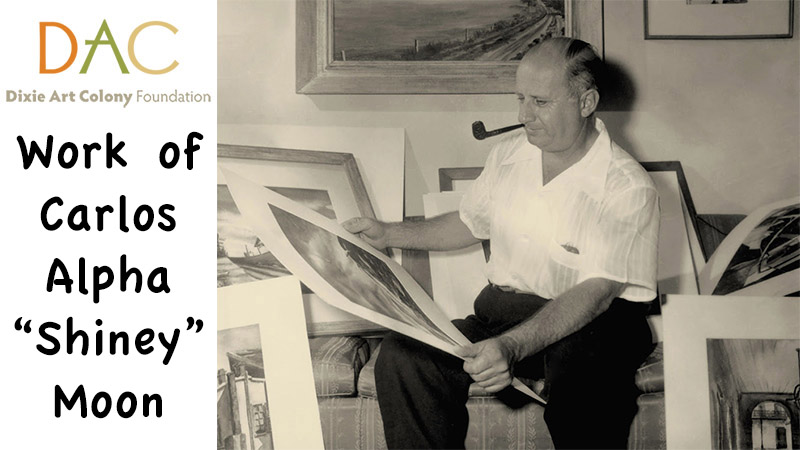 Andalusia native and Florala resident Carlos Alpha "Shiney" Moon will be featured in a preview of an upcoming Dixie Art Colony exhibit, "A Retrospective of the Works of Carlos Alpha 'Shiney' Moon."

The Dixie Art Colony Foundation will hold an “On the Road” event in Andalusia to feature the work of Covington County native and artist Carlos Alpha “Shiney” Moon.

The event will be held Tuesday, Dec. 28, at 2 p.m., when Mark Andrew Harris, DAC Foundation founder, and director will present a preview of the long-anticipated exhibition and program series titled “A Retrospective of the Works of Carlos Alpha ‘Shiney’ Moon.”

Moon grew up in Andalusia and lived in nearby Florala while participating in the Dixie Art Colony. “Shiney” Moon’s father, Charles Crawford Moon, operated a professional photography studio called “The Dixie Studio” in the Prestwood building in downtown Andalusia.

The presentation will take place in the Andalusia City Auditorium, once considered the city’s center of cultural and civic activities. The City Auditorium located in the old East Three Notch School was designed by architect C. Frank Galliher. The building was built in 1914 at the cost of $100,000.

In 2002, during Mayor Earl V. Johnson’s first administration, a restoration project was undertaken to convert the beautiful and historic building for use as the Andalusia City Hall.

The Dixie Art Colony Foundation was founded as part of an effort to place greater emphasis on the research, documentation, and preservation of the legacy of Central Alabama’s unique and historic Dixie Art Colony. Its primary mission is to preserve and promote the history and legacy left by the Colony participants as we engage, inspire and educate artists and the public at large about the colony.