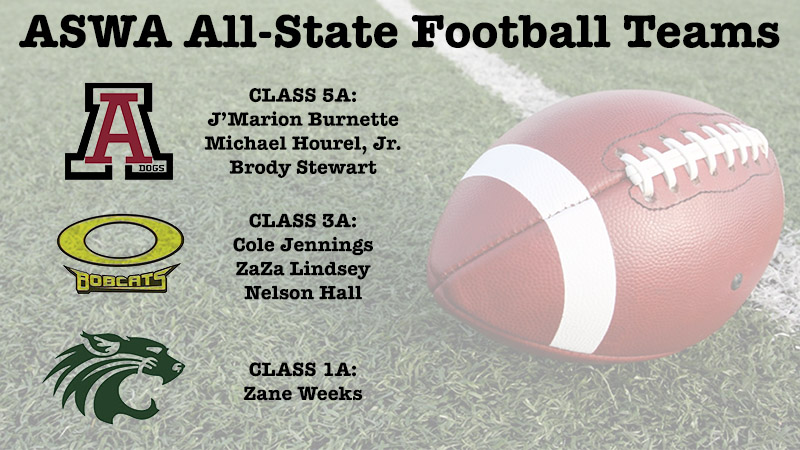 Andalusia and Opp each had three players chosen in their respective classifications, while Florala had one.

J’Marion Burnette and Michael Hourel, Jr. were both named to the Class 5A First Team. Burnette had a stellar season for the Bulldogs at running back. Hourel finished out his high school career in style with a successful showing at the linebacker position. Junior Brody Stewart was recognized as an offensive lineman on the Second Team.

“I’m certainly proud of them. It’s much deserved, and I think there were some others who probably deserved to be selected, but unfortunately, we don’t get to pick that. Anytime we can get some guys on there especially where we’re located, that’s a great thing. When you look at the list, it’s usually inundated by the urban areas. I’m proud we got the ones we did, and all are very deserving. They all work hard, and it’s certainly quite an honor,” AHS Head Coach Trent Taylor said.

Cole Jennings was elected to the Class 3A Second Team as a senior defensive lineman for the Bobcats. Senior ZaZa Lindsey was highlighted as a Second Team Athlete. Sophomore Nelson Hall was listed among those receiving Honorable Mention for his role as a defensive back.

“I’m excited for all of them. One of those things we mention is that there are many players who contribute to our program, but there is not enough space to list all of them. I hate that part of it, but I’m excited for Cole and ZaZa as well as Nelson. Those are great honors for all three,” said OHS Head Coach Mike Dubose.

At Florala, Zane Weeks was elected to the Class 1A Second Team as Athlete in his junior season with the Wildcats.

“We are very proud of Zane. He led our defense this year in almost every category. He was one of the top punters in 1A football, and he was our leading receiver on offense. He had a great offseason last year, and we expect another great offseason this year. We expect his senior year next year to be his best one yet. He is a great example of what hard work can do for a young player. He is also just as dedicated in the classroom, which is even more important. Again, we are extremely proud of Zane and excited to see what he does next year and beyond that,” FHS Head Coach Chris Littleton said.

All three teams will continue to work hard in the weight room and during spring training. The 2022 season is scheduled to kick off for each team next August.