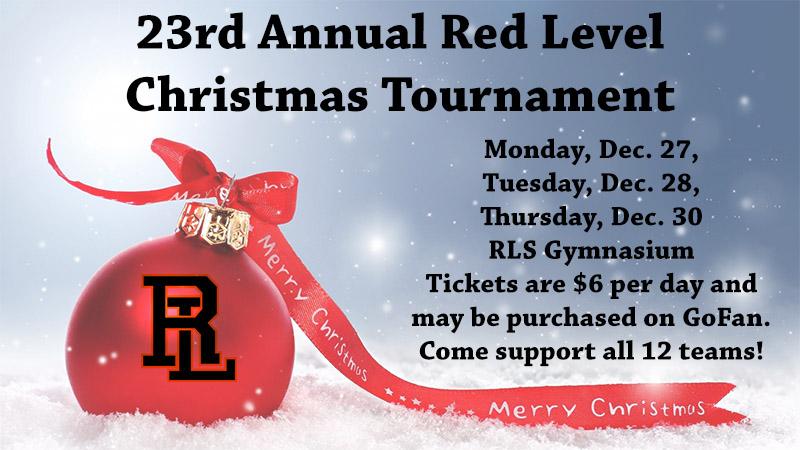 The 23rd Annual Red Level Christmas Tournament will begin Monday, Dec. 27 and be played through Thursday, Dec. 30. Five teams will participate in the girls' bracket, and seven teams will compete in the boys' bracket.

The annual Red Level Christmas Tournament was missed in 2020 due to the pandemic but is back for its 23rd showing next week.

The tournament begins Monday, Dec. 27, and runs through Thursday, Dec. 30 at the Red Level School Gymnasium. The girls’ bracket is comprised of five teams. The field increases to seven squads in the boys’ bracket.

“On behalf of Red Level School, I would like to extend my sincere thanks to the 12 varsity basketball teams who will be participating in our 23rd Annual Red Level Christmas Tournament. I encourage all fans from the participating schools as well as others in the area to come out and show their support of the tournament. Our concession stand will be open, and there will also be halftime activities. We will have a hospitality room for coaches and administrators. Go Tigers,” Head Coach Bridges Anderson said.

T.R. Miller and Opp commence the tournament with a girls’ game Monday at 1 p.m. The first boys’ contest is next at 2:30 p.m. when TRM faces Monroe County. Straughn and Opp battle each other in boys’ action at 4 p.m. before Andalusia’s boys square off with Flomaton at 5:30 p.m. Red Level’s girls close out day one against Hillcrest-Evergreen at 7 p.m. 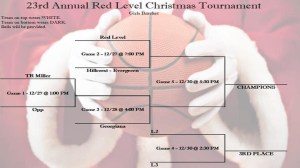 Georgiana’s girls play the winner between T.R. Miller and Opp in the initial game Tuesday at 4 p.m. The Straughn-Opp winner and T.R. Miller-Monroe County winner play the second game of day two in boys’ action at 5:30 p.m. Red Level’s boys draw the Andalusia-Flomaton winner at 7 p.m. in the last game of the day. 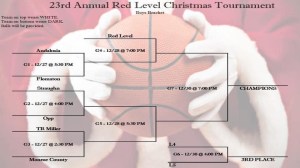 The tournament takes a break Wednesday and wraps up Thursday with four games. Third-place games will be held first with the girls playing at 2:30 p.m. and the boys following at 4 p.m. The girls’ championship game is scheduled for 5:30 p.m., and the boys’ title contest is set for a 7 p.m. start.

Tickets are priced at $6 each day of the tournament and will be sold online through GoFan or on the GoFan mobile app.