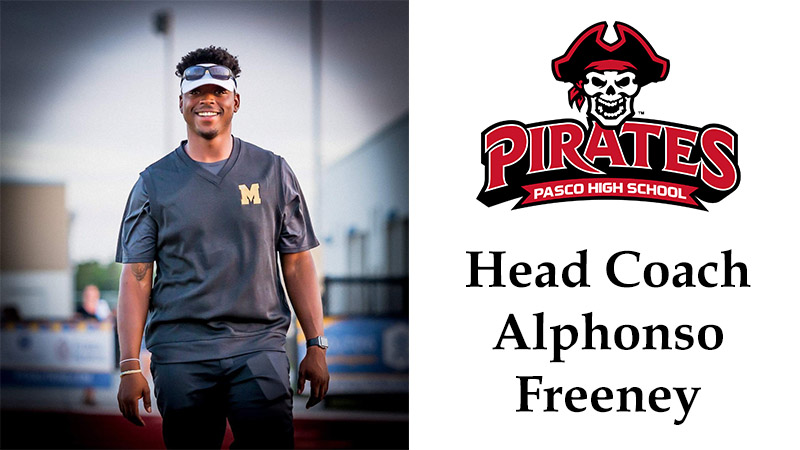 Alphonso Freeney, a graduate of Straughn High School and former football standout for the Tigers, is the new head football coach for the Pasco High School Pirates in Dade City, Florida.

Football has been ingrained in the blood of Alphonso Freeney, and it has led him to a new opportunity as a head football coach in the state of Florida.

Freeney will take over the program at Pasco High School in Dade City, Florida.

While at Straughn, he was a team captain in his junior and senior seasons. He finished his high school career with more than 3,000 rushing yards and also added over 1,000 passing yards with 80 touchdowns for the Tigers. After graduating with honors in 2006, Freeney enrolled at Jacksonville State University and played fullback. He played in 32 games for the Gamecocks and was a starter for 24 of those contests.

“It’s one of the most storied programs in Pasco County. They are the only school in Pasco County that has won a state championship. They have fallen on hard times the past few years. I believe last year was their worst year in a while as they went 0-10. However, I’ve met with some of the kids, and they are ready to buy into a championship mindset. We have very talented kids at Pasco that my coaching staff and I must do a great job of developing them as students and athletes,” Freeney said.

Pasco finished winless in a football season for the first time in 79 years. It was a rough go for the Pirates, who were outscored 346 to 18 in 10 contests during the 2021 campaign. Freeney previously coached at Mitchell High School for seven years. He coached running backs for five years and the offensive line the following two years. While at Mitchell, his team rushed for 1,720 yards in the 2020 season and upped that number to 2,191 in 2021. MHS also won seven consecutive district titles with Freeney.

“I believe this opportunity for me brings a chance for me to do what I love doing, and that’s changing the lives of our young generation. It’s an opportunity for the kids who look like me and have gone through the things I have. No matter what the situation is, they can grow every day and reach every goal. This opportunity for me is also me showing my past players, my son, and my daughter that I’m chasing greatness. I wouldn’t be able to do any of this though if it wasn’t for my wife and family supporting me and allowing me to bring my players into our family,” he said.

“I’m not on campus yet, but there are some kids I already talk to every day. I’ve already challenged these kids to be more than average because they are not average. They are future bosses and extraordinary individuals. Their success is my why. It’s not about the X’s and O’s or wins and losses. It’s about them knowing I have their backs, and they can count on me to work hard for them. My players will learn to set goals and also learn to reach them.”

He is the son of Albert and DeLisa Freeney and has been married to his wife of seven years, Lauren. They have a 7-year-old daughter, Harper, and a 5-year-old son, Drennen. “I’m so excited and extremely lucky to be a Pasco Pirate,” Freeney said.