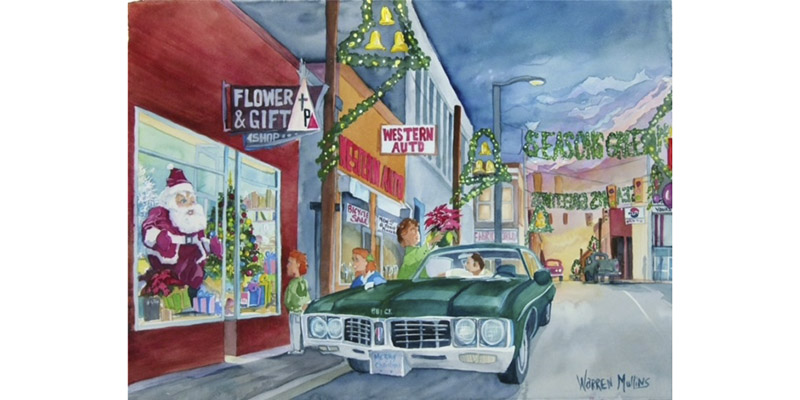 A social media site that hometown Andalusia folks, here and yon, seem to enjoy is “Growing Up in Andalusia.” A request was recently posed asking readers to share any unique Christmas memories they might have. For you readers that are not familiar with that blog (Did I say that right?), here were some responses that are or might be significant one day when someone browses the local Andalusia Star-News archives.

John Vick – “Visiting my grandmother Lottie Vick near Red Level where we would pick out a cedar tree to cut down and bring back home.”

Mike Williams – “Being sent to the Martin Theatre on Christmas Eve so our parents would probably have gone to get our toys out of lay-away from Good Year and White Auto!”

Betsy Herring – “We’d load up in the station wagon with neighborhood kids and drive around looking at Christmas decorations at home giving them up to 10 claps for the best.” 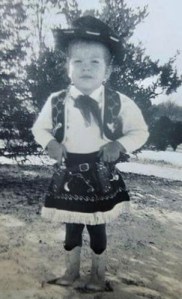 Debbie Etheridge – “There were the greatest Christmas memories in Andalusia. We would ride out on the Florala Highway to the Portemont house and to gaze at all of their lights. (They owned the famous carnival business, Johnny’s United Shows, so there were plenty of lights to see!).”

Lillian Dickson – “I always got in my stocking candy, fruits, nuts, and a cherry bomb and sparklers.”

Tom Sawyer – “When I was in the 6th grade, I got a bicycle with no restrictions for street travel. I felt totally liberated!”

Kimberly Darling Rankin – “My parents always brought us from Atlanta to Andalusia, their hometown. At the first sight of lights on the poles along East Three Notch Street with tinsel bells, angels, candy canes, etc., that meant that it really was ‘almost’ Christmas.”

Vivian Wynell Carnley Brooks – “At Grandma Gatlin’s house on Church Street, there was always a house full of family, and the food was to die for. She lived right across from Robinson Park and the company would spill out into the park.”

Jerrilynn Curry Lelmley – “I remember marching with the band in the Christmas parades (David Wyatt remembers that she was a majorette!).”

Harriet Phelps – “Gathering at my grandparents’ house is my happiest memory. Most are gone now but memories can’t be erased.”

Donnie Griggs – “We always prayed for a good pecan crop. The better the harvest, the better Santa was to us.” 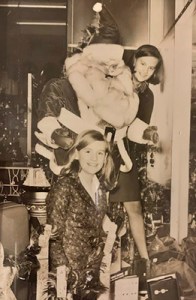 Donna Prestwood Kelley – “Little did I know at the time that Ron Collum was the Secret Santa in Western Auto.”

Bill Tunnell – “Working until closing on Christmas Eve at the A & P and loading all of the Christmas fruit into Dr. Evers’ car for him to deliver to the nursing home patients.”

Terry Wilhite – “I am still infatuated with the street pole decorations including the ones draped from pole to pole on the East and West ends of the square with ‘SEASONS GREETINGS.’”

Marianne Merrill Weber – “Watching a large cat leap into the top of a friend’s decorated tree, screech, and ride it down to the carpet!”

Harvey Donaldson – “On December 25, 1947, Santa Claus brought me (age 5) a Lionel electric train (from Western Auto I learned later) that still resides on the second shelf of my office bookcase.”

Andy Coleman – “One year Santa Claus visited Columbia General Hospital for the staff Christmas party. After it was over, Dr. Joe Sox made rounds wearing his Santa outfit.”

Gayle Grimes Rawls – “I remember my mother taking me around to see everyone’s house decorated.”

Sue Franklin Taylor – “Riding around town to look at the decorations in my pajamas and house coat. It was always freezing cold at Christmas time back then.”

John Scherf – “I remember when the pond was frozen over at Springdale when I was 10 years old (1973). It was the biggest snow I had ever seen up to that point.”

Linda Brodgen Palmer – “On Christmas morning around 1946, my three year old sister dropped my doll. The head cracked all across the top from ear to ear. I was five years old and had been waiting so long for a new doll from Santa. That was very traumatic for me. I may have forgiven her…….a couple of years ago!”

Cindy Sasser Sanders – “When I was about five or six years old, it snowed on Christmas, maybe in 1959 or 60. I had gotten an Annie Oakley cowgirl outfit from Santa. Mama took my picture. We lived on 4th Avenue (and Roosevelt Drive) right across from the present junior high school.”

Benjie Nall – “Listening to letters to Santa read on the local radio station.”

Skip Eiland – “Got a BB gun when I was six. Went outside and shot at a mockingbird on top of a tall birdhouse. Killed the mockingbird. Definitely didn’t mean to. Never shot another one.”

Joe Perrett – “I put cracker balls under the rug at the fireplace on Christmas Eve so I’d hear Santa Claus come down the chimney.”

Judy Cooper – “Caught the house on fire after our Christmas dinner by leaving the candles burning on the dessert buffet. Not too much damage a paint job didn’t fix. The grandchildren remind me today that I am not allowed to light real candles!”

Deb Pebworth Miller – “I remember our good family friend and my dad’s co-worker Donald Cooke reading letters to Santa on WCTA radio. Who can forget the bowing Santa in the show window at T-P Flower and Gift Shop?

Alan Sanders and William C. Jones also have vivid of memories of the Santa Claus displayed each year by the Taylor and Pippin families. Angelyn Pippin Simmons says that Alan Cotton has the Santa Claus at his flower and gift shop, but he no longer bows!”

Valerie Keith – “On Christmas Eve my parents would drive me around to see the lights to put me to sleep. They would say, ‘Santa is already in Andalusia. You need to go to sleep when we get home so he can come to the house.’ Mother would display a snow scene each year at home. I still carry on that tradition to this day.”

Becky Kyzar Smith – “What fun it was to run through the neighborhood early on Christmas morning (We had been up for hours!) to see what Santa had brought my friends at their houses.”

Sue Bass Wilson – One Christmas holiday season when my family was trimming the tree, my parents had to stop to go to a Christmas party, and we hadn’t completely finished the decorating. The silvery tinsel had not been added. The shining star had not been placed on the top. They told me and the baby sitter (Patricia or Annette Powell), “While we are gone, DON’T LET HER TOUCH THE TREE. We will get to that when we return.”

Well, of course, as soon as they drove out of the driveway, I moved that Southern Craftsman hassock over close to the tree and stood on my tip toes to try and place the star. That foot stool got off balance and tipped over. Yes, I fell and broke my arm! Well, between that accident and my getting the mumps that Christmas, I couldn’t jump on the pogo stick Santa Claus brought me for about two weeks. That got me way behind with the neighborhood kids on competing with our pogo stick skills.

Yes, when we recall our memories of the past, it helps us to appreciate the present, and even move into the future. Thanks to those friends for their unique and colorful social media posts. Let me encourage you readers to pass along those Christmas memories to your children and grandchildren. One day they will Remember When.