A story of a Christmas present, hope of the New Year 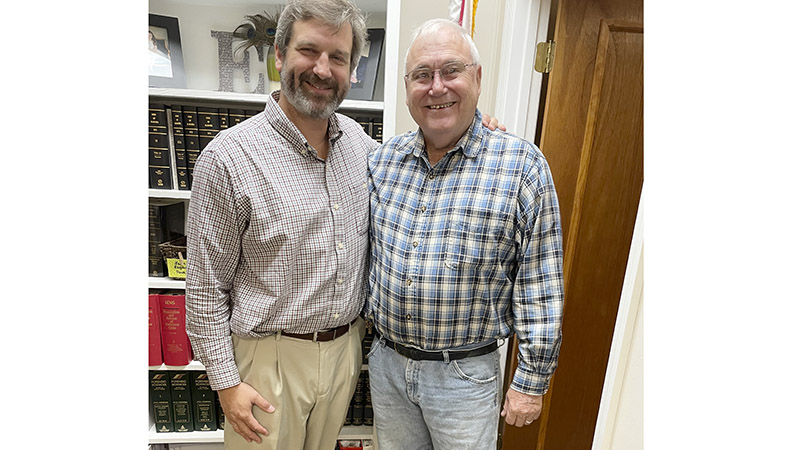 Robert “Buddy” Metcalf grew up in Opp, Alabama in the 1950s. Born in 1954, Buddy saw the textile industry thrive—and then suffocate—in this rural, South Alabama town. He saw much more than that, too… “When I was 15 years old, I saw two men come out of The Bungalow, a local juke joint. They exchanged words, and one man pulled a knife and stabbed the other in the heart. I heard him breathe his last breath. I’ll never forget what that sound did to me.”

Buddy cooperated with the police investigation, and the man who committed the murder was arrested, prosecuted, and convicted for murder.  Buddy was the only witness to the crime.  “At 15, I can promise you there were a lot of other things I would have rather been doing. But something inside of me told me to ‘do the right thing.’  So, I did.  Scared to death, but I identified the murderer.”

Some years later, Buddy’s brother, Johnny Ray Metcalf, would become the Chief of Police in Opp, Alabama. Buddy sometimes wonders how that murder he witnessed as a teenager affected the rest of his life and how it might have affected his brother’s, too.  “I don’t think it’s a coincidence that my brother went into a profession where he was protecting and serving. That was how we were raised. I also don’t think it was a coincidence that, as close as we were growing up, he was drawn to a career where he helped victims, knowing what I went through as a witness to a murder.”

Like his brother, Buddy spent a lifetime serving. He went full-time with the National Guard in 1983.  “Serving my country was the least I could do. We live in the greatest Land in the world, and I had no hesitation about giving something back.”  Buddy saw the textile industry drying up, and the opportunity to go full-time with the Guard came at just the right time. “I didn’t hesitate when I was offered the job. The post was in Elba, just a few miles from home, and it was a job I knew I would enjoy. I also knew that this job with the Guard would enable me to support my family long-term.”

“Of course, I blew that,” Buddy lamented. “After nearly 20 years in the Guard, I was an aging man in a young man’s world. The guys I worked with were all half my age and twice as strong and twice as quick. One night, a guy I thought was my friend told me he could give me something that would make me feel like a young man again. Being a little bit too trusting and a little bit too naïve, I gladly accepted the help. That was the first time I ever did methamphetamine.”

Soon enough, Buddy’s addiction brought him back in contact with the law. However, this time he was not a witness, nor was his brother involved. Buddy was arrested on Christmas Day, 2000, for Trafficking in Methamphetamine.  “That was the best Christmas present the Lord ever gave me, but I wouldn’t find the true Hope of that present until the New Year.”

Stopped for an expired tag, the officer observed drugs and drug paraphernalia in plain view while talking to Buddy through the driver side window. Later, a search of the car led to the discovery of a meth lab and trafficking weight of methamphetamine oil in the car. “I was in bad shape. Not because I had been arrested—although that wasn’t good—but because the only thing I had to my name was an old, beat-up, four-door sedan.  And the reason it was so important to me was because it gave me a way to hide my meth lab. I cooked for myself. I did it to support my own addiction. At that point in my life, my addiction was the only thing that was important to me.”

Two years later, Buddy pled guilty. The court decided to give Buddy a second chance and put him on probation. According to his plea agreement, Buddy was to complete “the court drug rehabilitation program” as part of his probation. “I wasn’t ready, though,” Buddy recalled. I had not truly changed my life, even though I had done my best to convince the judge that I had.  Looking back on it now, I see the bigger picture. I played a game the first time I got arrested, but I was miserable. I was praying to a God that I didn’t believe in, and I did not want to do life anymore.” God answered Buddy’s prayer, he says, on April 8, 2003.  Less than a year after the court had given Buddy a second chance, he was arrested again for possessing methamphetamine.  “I remember thanking the police officer as he took me to jail. I knew he had saved my life.”

Because Buddy was on probation for the first offense, he now faced a serious problem: a new, young prosecutor sought to revoke Buddy’s probation. “He could’ve put me in prison for a really long time.”  Buddy had a 15-year prison sentence hanging over his head.  If his probation was revoked, he would have to serve that time.  Plus, he also faced new felony charges which could also lead to incarceration.  “But the Lord was already doing His work for me. You see, that new, young prosecutor was also a strong believer and a strong advocate for rehabilitation. So was the judge that was assigned to my case.”

Walt Merrell serves as a District Attorney for Covington County. In 2003, he was that new, young prosecutor, hired exclusively to handle drug cases and the growing tide of what, he says, is, “the plague that is methamphetamine.”

“I’m somewhere in the middle,” Merrell said, when asked to describe his prosecutorial ideology. “I believe that sometimes, the best way to ‘fix’ a problem is to put somebody in prison. Other times, I think that rehabilitation or education are the best ways to ‘fix’ the problem. Whatever the case may be, though, I think my calling is to try to help people fix the problem.”

Merrell took that approach when it came to Buddy and his cases, too. “He held me accountable,” Buddy said. “We struck a deal where I would have to serve nine months in jail, but then he also made me commit to go to a year-long residential rehab program. The judge signed off on that deal, and that was the day that I began to unwrap the Hope that was hidden inside that ‘best Christmas present’ I had ever received.”

Buddy served his time and, all the while, kept in contact with Merrell. They formed an unusual relationship that has stood the test of time.  “Walt helped me get into The Shoulder in Baldwin County. He wrote me a letter of recommendation. I know I never would’ve gotten in were it not for the things he did to help me. But I also know that had he not made me serve some time, I probably would have simply thought, ‘I beat the system again’.  Holding me accountable and helping me is what humbled me enough to see what I had done to destroy my life and the lives of the people around me.”

After spending a year in The Shoulder residential rehabilitation program, Buddy graduated. He had done so well, though, as a client, that The Shoulder offered him a job. “Walt and Judge McKathan combined themselves to save my life. They saved me from addiction. However, The Shoulder gave me the tools that I needed to live free of the bondage of that addiction and gave the best of my life back to me. Most importantly, though, it was through that year or so of my life that Jesus heard my cries of desperation. He didn’t mind taking those nail scarred hands and reaching down into the sewage that was my life. He cleaned me up and planted me firmly on His rock. And that is the Hope that was contained inside that Christmas present.  It just took me a while to find it!”

Buddy spent the next 15 years working at The Shoulder. He restored his relationship with his daughter, married his second wife, his beloved Reva, and devoted a second career to helping others.  He realized his life came full circle. “I started out doing the right thing. I got a little distracted along the way, but I hope and I pray that I ended up where the Lord wanted me… helping others.  Lord knows others certainly helped me along the way so that I could get here.”

Buddy and Merrell are still good friends. Through the years, Merrell says they have shared good times and bad together. “My own brother suffered from addiction.  I called on Buddy to be his counselor. He answered the call without hesitation, and he helped my brother and saw him to his own graduation from The Shoulder. Ours is truly a unique story. I love him like he’s my own blood brother,” Merrell said of Buddy. “I love him in the same way,” Buddy responded.

Though he’s retired, Buddy has not lost his desire to help others.  Neither has Merrell, now in his 16th year of service as a prosecutor.  Merrell teaches addiction recovery classes at Crossover Ministry, a residential addiction recovery program in Buddy’s hometown of Opp.  The two had lunch recently at a local eatery.  Merrell said “I already have him committed to helping me some at Crossover.”  Buddy grinned and responded, “Maybe someone else needs to find the Hope of a new year, too.”