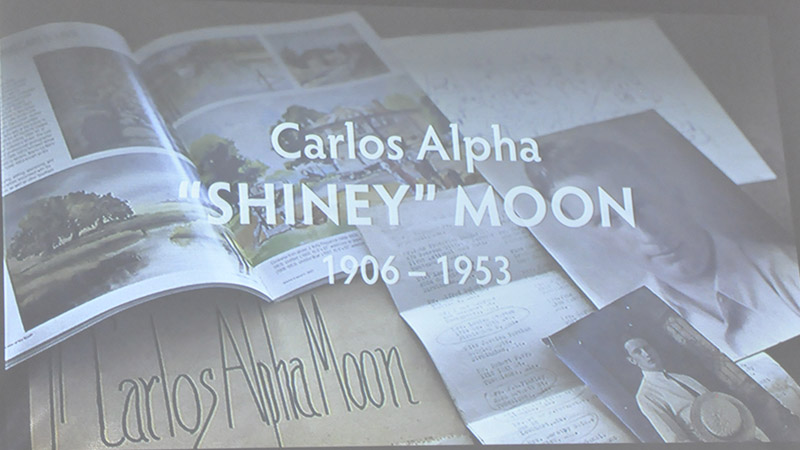 The Dixie Art Colony will display an exhibit featuring the works of Carlos Alpha "Shiney" Moon at the Lower Alabama Arts Coalition this spring.

The event took place at the Andalusia City Hall Auditorium and was a preview of upcoming art pieces by Moon that will be on display in the spring.

The DAC was first established in Elmore County in 1933. The DAC Foundation was founded in 2015 as part of an effort to place greater emphasis on the research, documentation, and preservation of the legacy of Alabama’s unique and historic Dixie Art Colony. The original Dixie Studio was in the Prestwood Building of downtown Andalusia.

“The purpose of this presentation is to hopefully bring awareness to what we plan to do here in the spring. We will focus on the works of Shiney Moon and his participation in the Dixie Art Colony. I will be presenting a series of slides that show some of his work, a few photographs, and contributions he made to the community,” Harris said.

Moon was born on May 18, 1906, in Birmingham and grew up in Andalusia. His father, Charles Crawford Moon, became known as the town’s first professional photographer. After graduating from Andalusia High School in 1928, Moon attended Alabama Polytechnic Institute, what is now Auburn University.

In 1933, Moon married Sadie Pouncey of Florala. Following in his father’s footsteps, he opened a photography studio in Troy. His studio barely made it through the early years of The Great Depression. After his mother-in-law, Alice Pouncey, became ill in 1935, Moon moved to Florala to care for her and manage her ladies’ dress shop. On April 22, 1935, Carlos and Sadie Moon became the parents of Martha Trelle Moon.

Two of Moon’s earliest paintings were an oil on canvas of a pine tree and the Florala Tung Mill in watercolor on paper. Moon started painting as early as 1930, but his artistic career did not begin until 1944 after his daughter attended a two-week girl’s camp known as Camp Grandview. One of the projects at camp was to paint designs on pottery using oil paint. During the trip home to Florala, the Moon family stopped in downtown Montgomery and purchased a set of oil paints and brushes.
Moon taught at the Bayou colony and then opened the Lake Jackson School of Art in Florala. He had more than 35 students and also began conducting art schools in Andalusia, Brewton, and Geneva. His works were featured in the March-April 1953 edition of the Alabama Artist magazine, and he also did untitled abstract work. Moon succumbed to a heart attack and died on July 27, 1953, at the age of 47.

His obituary in the Florala News read, “Regarded as an outstanding painter, Mr. Moon, his roots deep in southern soil, painted in a language that grew out of the Southern heritage, out of the land itself. His paintings were real and genuine, belonging to the culture that produced them. He was noted for the brilliance of his colors and depiction of typically southern scenes.”

Harris, who is also a graphic artist, said the Lower Alabama Arts Coalition (LAAC) will have works on display on a date to be announced by the DACF.